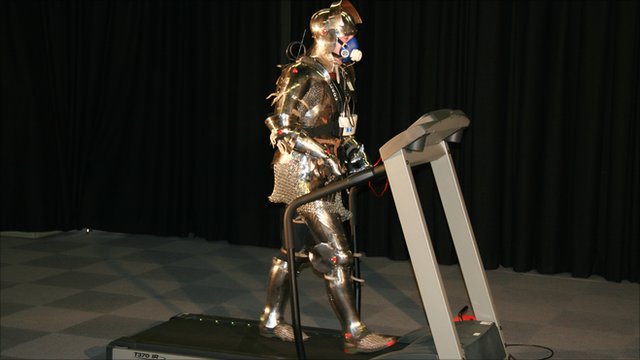 Just how tiring is heavy medieval armor? How much does a load slow down climbing? If you’re the type who appreciates a bit of realism in your RPG action, here’s what recent research and an anecdotal report have to say about those questions.

Quite a few months back, a study published by The Royal Society B looked at the effects of medieval armor on physical performance (BBC summary here). No one should be surprised by its finding of “hey, heavy armor is tiring!”. But the researchers’ detailed approach of measuring actual energy consumption under controlled treadmill conditions yields some quantitative crunchiness for the consideration of simulation-happy gamers.

The four subjects were fair-sized males in their mid-thirties and experienced in wearing replica armor. For the research, they wore custom-made full suits of 15-century-style plate armor averaging 35kg, representing a big proportion – about 44% – of their body weight. Plenty of results came out of the tests, but here’s what’s of gaming interest: the energy cost of locomotion (i.e., energy cost above that of a normal resting state) was about 120% (walking) or 90% (running) higher than that of unarmored men. In short, the armor roughly doubled the energy expenditure for motion.

An additional finding was this: the added cost of locomotion was worse than that of carrying the equivalent weight in backpack form, with the latter increasing cost by only 70% (walking) or 50% (running). That was a surprise to me; I had guessed that armor would create less of a burden than equivalent weight in a compact bundle, as the armor is more evenly distributed and close to the body, whereas a bulky pack in motion might tend to pull the body in its direction (due to inertia), made worse by placement of mass further from the body (due to moment of inertia).

I allude to this assumption in Summary of ways to handle power-vs-weight in GURPS creatures, suggesting that armor might be treated as less encumbering than “generic” loads (though I didn’t suggest worrying about it, and haven’t done so in games). The above research suggests the opposite, and offers a reason as well: it may primarily be heavy leg armor, and thus the burden of lifting and swinging heavy legs, that greatly increases energy cost beyond that of supporting and moving a load higher up on the body. “Heavy leg syndrome” may not account for the entirety of the difference, however; the researchers suggest that restricted breathing caused by armor, and possibly even frictional losses in armor joints, may also play roles, though these were not isolated and measured.

So, setting aside the matter of armor vs non-armor loads, how do the armor findings match up with the rules in a notably simulation-friendly game, GURPS? We have to make guesses, of course, including the assumption that we can tie “cost of locomotion” directly to Fatigue cost. Doing so, let’s imagine a ST 11 character carrying 35kg, or 77 lbs. He’s got Heavy encumbrance, for a combat or hiking Fatigue cost four times (B426) that of an unarmored man. A ST 12 or ST 13 character would have Medium encumbrance, for a tripled Fatigue cost. It takes a hulking ST 14 character to achieve Light encumbrance, with a doubled Fatigue cost that’s right on the money where the research findings are concerned.

These observations suggest that GURPS‘ Fatigue penalties for encumbrance are perhaps harsher than necessary, but aren’t terribly off the mark.

Climbing with a load

In a somber video on the response to the 9/11 World Trade Center attack, we’re told that “a firefighter in full gear, carrying sixty-something pounds of hose and equipment, takes about one minute to climb a flight of stairs”.

If true, that’s pretty slow. To compare unencumbered results, you can easily measure your own time on stairs. The comparison may not be too useful, though; the above sounds an awful lot like an off-the-top-of-the-head estimate, and we know neither how high a flight of stairs is involved nor whether the imagined firefighter in question is rushing or taking a sustainable pace.

But is there anything we can get out of it? Well, given that you can likely climb some easily-testable flight of stairs in only ten seconds, or even five at a fast pace, the anecdote does suggest that encumbrance has a big effect on climbing performance. Taking GURPS as a guide, sixty-some pounds leaves a fit ST 11 or ST 12 character at Medium encumbrance, cutting Move to 60% of unencumbered Move. That penalty is rough and may be quite reasonable on flat ground, but where stairs are concerned, it still doesn’t create the sort of slowness suggested above.

That’s the sort of thing I tried to address in old climbing rules for my GULLIVER house rules on physical performance. The detailed rules there essentially start with normal unencumbered Move, cut that Move down for the unusual and inefficient action of climbing itself, and greatly boost any encumbrance via an effective weight multiplier (the tougher the climb, the higher the multiplier). The increased encumbrance further affects climbing Move and fatigue, and, quite realistically, can remove any ability to perform a difficult climb even when the character can still lumber across flat ground.

The GULLIVER rules suggest multiplying effective weight in a climb, such as x1.4 for a 30° climb and x1.6 for a 45° climb. The slope of a staircase might fall in between the two, for x1.5. However, my rules envisioned actual sloped and/or uneven surfaces, not the flat and even surfaces of stairs, which are designed to make the ascent as easy as possible. I neglected to consider stairs, so will have to make up something here. Let’s say that a perfect stair-like “climbing” surface cuts about 20% off the degree of multiplier over the base x1. As a result, the x1.5 multiplier for the slope of stairs becomes x1.4. (Likewise, the suggested x2 for a 90° surface would become only x1.8 for a ladder.)

Multiply the climber’s 65-lb burden by 1.4, and it’s as hampering as carrying 91 lbs on flat ground. That better matches the feel of hauling a load up steps, and kicks our climber into Heavy encumbrance with only 40% of his ground speed – definitely slow, if not wildly so.

However, my old GULLIVER rules incorporate body weight itself, not just carried weight, in their detailed encumbrance rules. That’s what I want to check here. Follow along with the rules’ Encumbrance Table as we put the full system to use:

Say our big and strong climber weights 185 lbs. The rules refer to “Load ST”, a sort of proto-Basic Lift hack I needed to work with GURPS 3e‘s handling of ST. For a 4e character, we can simply replace any mention of Load ST with Basic Lift /2 (14.5 lbs for our ST 12 climber); that works great.

Without a load, the character’s weight-to-strength ratio (WSR) = full weight / Load ST = 185 / 14.5 = 12.8, which my Encumbrance Table terms Negative 1 encumbrance. This odd name indicates a ratio of weight to power better than the default encumbrance of None, worthy of a small bonus to Move and athletic skills, which is appropriate for this muscled fellow.

Now we add the burden: Laden WSR = (185 + 65) / 14.5 = 17.2, which on my Table gives Light encumbrance. That slows the climber notably. (The result is still more generous than straight-up GURPS, as it accounts for the innate advantage this fellow has in hauling a body weight that’s light relative to his power.)

Time to hit the stairs! From my old rules, multiply everything by 1.4. Laden WSR goes from 17.2 to 24.1, pushing the climber into Heavy encumbrance. Again, that’s quite a reduction in speed, though still not as slow as that reported firefighter climb.

So, what’s in the above that’s both interesting and playable enough to inject into games? Here’s what I take away:

1. When designing or testing a set of rules, the armor research provides a good rule of thumb for how plate armor fatigues the wearer. Gamers already know that an armored man remains quite mobile; we don’t entertain the silliness of knights as overturned turtles when fallen, or as requiring cranes to mount their steeds. But we now have a good study to show that while full plate is indeed tiring, it’s not devastatingly so. Don’t worry about perfectly duplicating research results in your game, as we can never know the subjects’ “strength scores”, among other details. Just be happy knowing that if, during combat or other game action where you’d worry about fatigue, a reasonably fit warrior in plate armor gets tired at a rate of, say, between 1.5 to 3 times his unarmored self, then your game rules are likely in the ballpark of realism on this point.

2. Simulation lovers might want to play with other details from the study, accounting for the differing fatigue effects of backpacks vs armor, as well as body armor vs leg armor. Here’s a framework to whet the simulationist appetite:

3. Whether or not you use any of that extra detail, I stand by my recommendation for gaming performance in climbs: multiply all effective weight (whatever weight your encumbrance rules use) by some factor (a small amount for easy climbs, a large amount for difficult climbs) for purposes of encumbrance calculation. The multipliers I use are sheer guesses and the above firefighter example is only anecdotal, so don’t worry about hitting “realistic” target results. Just know that some sort of multiplier is very realistic in making a load far more exhausting in a climb than on the ground.

There. For my own home-brew rules, I’ll be sure to keep 1 and 3 in mind. I may offer some suggestions from 2, too, but only as optional details (they’re pretty futzy stuff).

How about you? Anything of interest in the above?