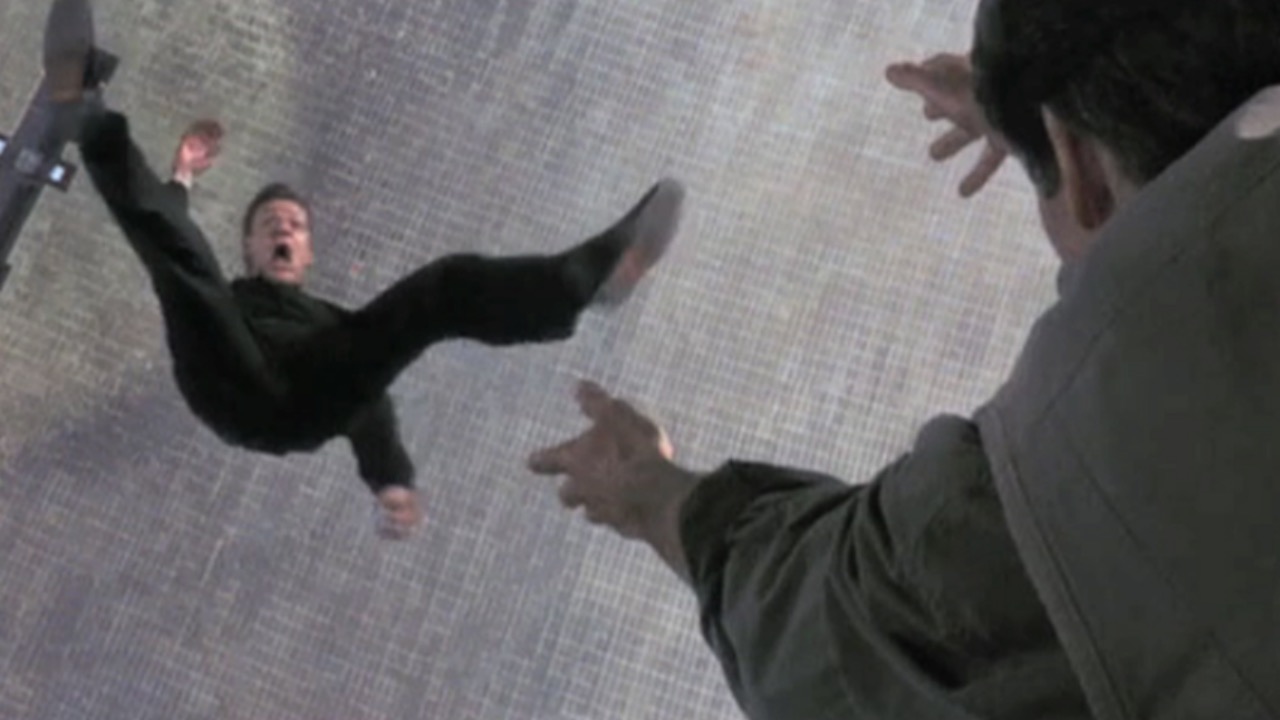 Are falls properly deadly in GURPS? Over a wide range of fall distances, impact surfaces, character sizes, etc.? I dunno. But here’s one interesting piece of data – an expert’s claim, anyway – that we can use to match one real-life situation against the results generated by an RPG simulation, and see how the two compare.

So go get some favorite GURPS characters, nonchalantly lead them to the rooftop of a four-story building, and push them off! Let’s see how many survive.

Falls and the LD50

The AV Club article “Allow this trauma surgeon to ruin a few of your favorite action scenes” introduces a video in which trauma physician Dr. Spiros Frangos reality-checks the hurts he sees in movies.

When Tom Cruise drove his car off of a parking garage floor in Mission Impossible: Ghost Protocol, Dr. Frangos says the character should not have walked away easily (if ever). Maybe. This is actually a hard one to call, as it’s an unusual fall, what with the car and seat belt and air bag and all that.

But for the far more common case of a fall victim who’s not handily ensconsed in a steel cocoon, the good doctor points us to “LD50”, or the “height at which 50% of patients are likely to die” – and names 48 feet (16 yards), or about 4 stories, as the LD50 height. (And how was this information obtained? Anecdotally, we hope!)

That claim is something we can place up against game rules! We’ll have to make assumptions, of course; namely, that the data behind the LD50 claim represents people of all ages and sizes, and thus “average” people overall. (This isn’t necessarily a correct assumption. It’s conceivable, as an example, that extreme sports fans and other daredevil types, who tend to be young and fit, are over-represented in falls.)

This means we’ll be dropping an average HP 10, HT 10 GURPS character, with no special traits assumed. We’ll also have to ignore real-life complications for which we don’t have information – e.g., to what extent the fatality statistics are lessened by landings on softer surfaces, or are worsened by head-first impacts (something not explicitly made an outcome in GURPS rules). And on the game rules side, we’ll ignore the complications of mortal wound results (which make proximity of medical care a factor) and optional rules like bleeding.

Those considerable caveats notwithstanding, where damage and death are concerned, this LD50 stat sounds like one of the cleanest claims we could test in-game.

So what’s the damage?

We turn to Basic Set p. 431, and… Hey, this is easier than I expected! That page’s example of a fall does all the work for us. It uses an HP 10 victim (“Bill”) and a fall of 17 yards, which is treated as identical to the 16-yard fall that we want. So let’s just read from the book.

Sounds painful… but it’s an average of only 14 damage. Subtracted from HP 10, our own Bill is left at HP -4 – he’s hurt badly, unconscious, and just plain out of action, but not dead. A very high roll on 4d could kill him, but we’re surely not getting our LD50 with this fall. (A fall onto soft ground, meanwhile, isn’t likely to even render Bill unconscious!)

Dialing up the hurt

So, what adjustment would make a GURPS 16-yard fall better match reality? Let’s try boosting damage by a healthy 50%. The above 4d damage becomes 6d, so our Bill takes an average 21 damage – just enough to push him over the negative HP line, and thus forced to make a death roll. Which, at HT 10, means a 50/50 chance of dying – exactly what LD50 calls for.

But that’s still too low! About half of those 6d damage rolls will exceed Bill’s death roll threshold, but that doesn’t make him more dead. (No roll on 6d will be high enough to force two death rolls.) Meanwhile, nearly half of the rolls will fall short of forcing even a single death roll. Really, we’re looking at a rough LD25 or so here – about 50% of the damage rolls will force a 50% chance of dying.

I’ll leave it to anyone interested to fiddle with the exact distribution of results and come up with a precise calculation of the damage dice that would yield a perfect 50/50 chance of survival in this fall. Until then, there is a good answer, and it’s an easy one, too. In comments below discussing an earlier version of this article, commenter Rasputin suggests a clean doubling of damage.

Doubling GURPS‘ 4d to 8d, we get damage that ranges from 8 to 48 points, with 28 as the average. Low rolls still won’t force a death check, but a high roll can force two or even three rolls. Most importantly, an average roll leaves Bill firmly between -1xHP and -2xHP – solid “roll HT or die” territory. Maybe I’ll work out the exact percentages later, but for now I think we’re close to LD50, with Bill’s appearance in future adventures pretty much a coin toss.

So, to give things a quick eyeball: At least where 4- to 5-story falls are concerned, we need to substantially increase fall damage if we want to simulate the doctor’s claim about mortality. Boosting fall damage by 50% gets us closer to the mark; cranking it up by a clean 100% appears to nicely mimic the doctor’s claim.

Or keep it low

Let’s note again that real life involves a lot of complications. Real case studies surely involve head-first falls that increase mortality, as well as falls onto softer surfaces that decrease mortality. I have neither the data nor the inclination to delve deeply into these. (And it’s worth noting again: we’re reality-checking a game fall of one specific height, not falls in general!)

Whatever the most realistic damage roll for a given fall might be, GURPS‘ by-the-book damage seems pretty low, perhaps even half what it (arguably) should be. But that’s not too shabby, as RPG simulation goes! I’ve seen games with far less realistic damage rules. And GURPS‘ lowballing of damage is a welcome thing for PC survival, as the heroes scale cliffs, leap chasms, wage battles on rooftops, and – oops, now it’s an abrupt return to Mother Earth’s embrace, the hard way.

Sure, lowballed damage means the bad guys are also handed a break when the PCs toss them off of heights. But in practice, that doesn’t help them much. A dropped mook who’s “merely” knocked out is still out of the fight (and is soon out of it for good, if the PCs are vengeful “finish the job” types). For them, the result is typically the same.

So. Keep GURPS‘ falling damage as it is if you want results that are survival-friendly (though still plenty deadly when the heights are high enough or the rolls bad enough). Double the game’s falling damage if you want heady realism (at least for some falls).

Either way, remind your players to take care. However harsh a mistress you decide gravity should be, she’s rarely a PC’s friend.

Well. That was mildly amusing, if not terribly useful. Heading back to the good doctor, I like how he ends the video:

As a trauma surgeon, when I go to the movies, I’m always thinking about the realism of particular injuries, to the fact that sometimes it ruins the movie for me.

I think we can appreciate that! Because as a gamer, when I go to the movies, I’m always thinking about how the screen action maps to game simulation. To the extent that even a discussion about movie action gets me rolling dice in my head.