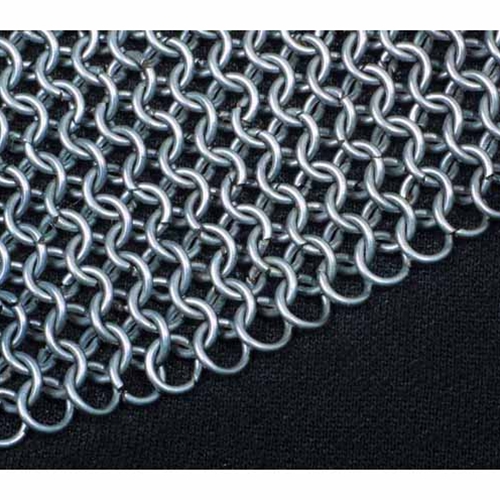 In this earlier post, I mentioned that I’d been answering email questions about my Edge Protection (EP) rules for armor in GURPS. For those with an interest in EP, here’s a paraphrasing of my correspondent’s questions (in quotes) and my replies:

In the table converting classic DR to DR+EP, mail still has reduced efficiency vs. impaling. This is surely a 3rd ed leftover, no?

After re-checking, yes, it is a 3e holdover. In 4e, mail has no special vulnerability vs impaling (or piercing, for that matter). I should change the the article’s stats for mail to match:

That sets DR low vs any damage type, with EP to keep the edges out. It fixes the problem of GURPS setting DR lower vs crushing than vs other damage types; as the EP article points out, that odd setup means you can hurt a mail-clad target more by making your sword blunt!

(Incidentally, an explanation I’d heard offered for mail’s special vulnerability to impaling in 3e is that a weapon’s point can slip between and break the mail rings. Apparently, 4e doesn’t present this as a special vulnerability. I leave the fact of the matter to the armor specialists out there; I’m happy with whichever they claim is realistic. What’s important is simply that DR not be set lower vs crushing than vs other damage types; that produces the above strange results.)

Digging deeper into simulation: What if one wanted to model GURPS mail more realistically, but without using EP rules? Maybe the answer lies in a better implementation of GURPS’ flexible armor rules. Say mail had DR 4 vs all attacks, but flexible armor were defined as allowing 1 point of blunt trauma damage per full 2 points of damage absorbed by DR. Then a 4-point blow would be “stopped” by mail’s DR 4, but still cause 2 points of blunt trauma damage, whether the weapon were a club, sword, or spear. That seems sensible to me, and it preserves the property of mail being “weak” vs crushing damage: it’s “weak” vs crushing because the wearer took as much damage from the club as from the sword or spear, something that would not happen if the edged weapons actually broke the armor. I think that’s much more realistic than current rules, under which the wearer mystically takes more damage from the club!

Realistically, impaling should be a better penetrator. As an engineer I seem to remember that the more force you concentrate on the smaller area, the more likely you are to penetrate. So shouldn’t all armour have less EP vs. impaling?

Sure, I agree. I haven’t done so, out of simplicity – and out of possible problems with combat balance – but some modest effect could be modeled, and shouldn’t mess up combat balance.

Halving all EP vs impaling would be simple. It may be too drastic, though; after all, that’s the effect you’d get from a super-weapon with an armor divisor of 2. So you could use -25%, -33%, whatever works.

But on that topic, by concentrating force into small areas, edges and points could (or should?) arguably decrease both DR and EP. In short, one could argue that all sharp weapons should carry some level of armor divisor, applicable to both DR and EP. I haven’t done so, simply because GURPS doesn’t generically reduce DR for edges. But it could be done.

Another idea is to split Crushing damage into two types. Call one “Blunt”, for fists, falling, flat side of sword, wooden club, stones. Call the other “Bludgeoning”, perhaps, for spiked and flaged maces and flails, the non-spiked end of a warhammer/poll axe or -hammer etc.

Both types of Crushing jar you around, with the same Knockdown or KO effects, but while “Blunt” mostly bruises, or breaks bones in bad cases, “Bludgeoning” tends to break the skin, creating nasty wounds, almost like the hack of an axe (but not like the cut of a sword). Bludgeoning should be quite good at penetrating armour.

Bludgeoning sounds like something between crushing and cutting, both in effect and in explanation (i.e., it concentrates force into a smaller area than standard Crushing, but not as small an area as Cutting).

I tried this long ago with HERO system. HERO uses very binary damage types: either Normal for fists, clubs, etc., or Killing for edges, points, etc. I wanted to allow for something in between, for exactly the types of weapons described above: maces with flanges, weapons with short spikes, and so on. (After all, these had to have been added to weapons for a good reason! Yet it’s not just a matter of weapons, either; I was also thinking of the difference between hitting your head on the corner of a table, vs on the flat side.)

My “middle type” of damage didn’t fit well with HERO, as the system actually handles its two damage types in different ways. In GURPS, there are a couple of ways to go. One “cheap” method is to just raise basic damage from Bludgeoning by 1, which has the effect of boosting both armor penetration and damage vs flesh by a small, flat amount. There are existing rules precedents, like the +1 basic damage for a shield spike (which still remains Crushing, “spike” notwithstanding). Think of it as a sort of Fine designation for Crushing weapons. In 4e, Fine doesn’t add to blunt weapon damage, but why not, I say? A Fine crushing weapon could mean flanges, short spikes, or other “semi-sharp” projections. (Or better yet, let’s separate this form consideration from overall quality rules; just name the configuration Flanged, which adds +1 basic hit, +X% to weapon cost (or +$Y for a shield spike), and can be added to a blunt weapon of any quality level. It’s perfect for maces, flails, war clubs, etc.)

But that’s one limited idea. Instead of that, it’s also theoretically possible to expand the GURPS edge rules to incorporate flanges etc. in a more generic way. Set a continuum of edge effects allowing for any degree of “edge”. If Cutting has the effects x1.5 damage vs flesh and (if you like) -X% DR, -Y% EP, and if Impaling has the stats x2 damage and -A% DR, -B% EP, then Bludgeoning could have stats like x1.2 damage, -N% DR, -M% EP. And then there could be some level between Bludgeoning and Cutting (sharp flanges?). And some level between Cutting and Impaling (maybe that’s where Cutting Fine should be, replacing the current Fine rules?). And so on. I think your message suggests such a thing.

There’s a concern, though. The above is fine for just thinking about edge “sharpness” alone, but weapon shape is important too, especially for certain special effects. That is, Cutting is more than just an edge of certain sharpness; it usually also assumes a flat blade, allowing (for example) cutting through a limb. Whereas a thick mace, even with sharp flanges that approach Cutting in damage mod, couldn’t zing through a thick object in the same way. Likewise, it’s easy to imagine a cutting edge with stats in between Cutting and Impaling, maybe even so amazingly sharp it approaches the same x2 damage mod as impaling – but could it also receive Impaling’s x3 damage mod vs vitals? That effect relies on a long, thin point going deep into vitals, which isn’t what even a very sharp swung cutting blade could always be assumed to do.

So, there’s more to consider than just edge-based damage mod, DR mod, and EP mod; at least some of the effect of GURPS’ blunt/cutting/impaling distinction seems to reflect overall weapon shape, not just edge sharpness. Combine that with considerations of playability (a x1.2 damage multiplier? Bleah.), and I don’t know how far anyone would want to go in getting weapon/armor interactions just right in GURPS. But for the interested, there are plenty of ideas to chase down.