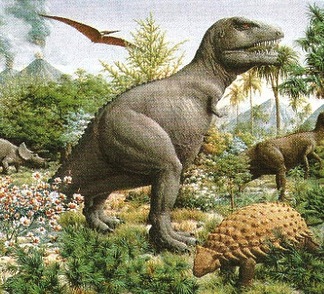 “Dinosaurs may be lighter than we thought!” That’s the news item I welcomed in RPG science: Designing dinosaurs just got easier? a couple of years ago. I liked the sound of that discovery, as the crushing weight of dinos made realistic designs a challenge when considering the effects of weight vs power.

But now? T. rex was bigger than thought, mused paleontologists more recently – over 9 tons for the Chicago Field Museum’s resident specimen, Sue (“I’m not fat, I’m just really big-boned”). So we may be back to super-heavy reptiles (go easy on the carbs there, Rex!), and back to various tweaks needed to keep the big dinos mobile under design rules that consider weight.

None of it’s a problem. The T Rex designs in my linked article above still work great, even if you want to boost the weight and the required support for it. Don’t worry if your final design comes out a wee ponderous, as the new heavy-dino hypothesis suggests a T Rex top speed that’s awfully modest for such a big predator: 10-25 mph (about Move 5-12 in GURPS terms).

The big range of that estimated top speed is a reminder of just how much sheer guess work palentologists still have to deal with – so if you want to stick with lighter weights, that’s fine too. Which leads right to the key point: While it’s an amusing diversion to try “designing” realistic dinos using detailed rules, in the end you can just slap on whatever power, agility, Move, and so forth that the game scene calls for. If you scare the bejesus out of the PCs, you’ve found the right numbers.

Whatever the poundage, T Rex will always be the king of the dinosaurs. Even if the T stands for “tubby”.