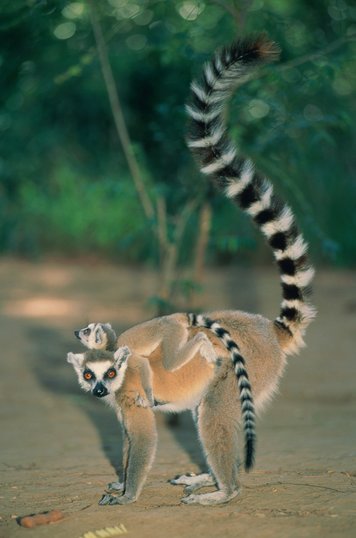 Got a game character with a nice fluffy tail? Those things can be good for more than just Furry decor, you know.

At a recent TED conference, biologist Robert Full presented research into the wonders of the wall-crawling gecko. (The video, embedded below, is worth a view; you’ll see both people and robots mimicking the gecko’s Spidey-like climbs.) But while uncovering the secrets of the lizard’s famous feet, scientists found the creature’s tail enabled some amazing acrobatic feats of its own, all with nice character-design potential.

As the biologists point out, a passive tail – a simple dead weight – hampers maneuverability. But an active tail does quite the opposite. Here what’s in the gecko tail’s nifty bag of tricks:

Not bad! On top of that, animals make great use of tails in grasping (like a chameleon), striking (crocodile), swimming (crocodile again), balance (kangaroo), communication (dog), and even simple tasks like shooing flies (cow). It’s enough to make a human feel distinctly lacking back there. (To further rub its caudal superiority in our faces, the gecko casually adds, “Oh, did I lose my awesome tail? I’ll just grow another.”)

Pin the tail on the PC

The old GULLIVER supplement’s book on creature extras handled all of these quite nicely (IMO) in a short section on designing tails. The idea is simple: Let a tail enable purchase of a number of athletic traits that might not otherwise be justified. The specifics should work in GURPS 4e too, with a little polishing like this:

A tail can be defined as a 0-point effect, perhaps useful for nothing more than whisking flies or twitching to show anger, even as it gives combat foes another thing to grab onto. The appendage can be a slim tail (treat as a foot or hand for targeting and injury purposes) or a heavy tail (treat as an arm or leg).

However, a tail could add specific athletic benefits, especially if long or heavy:

Athletic skills: A tail allows purchase of bonuses to skills including Flight, Swimming, Acrobatics (including Aerobatics and Aquabatics), Jumping, and Climbing.

Balance: Purchase Perfect Balance. Or, for finer detail, allow a DX/E Balance skill that replaces DX for any roll to maintain footing and balance. As with the athletic skills above, a tail allows purchase of an innate bonus on this skill.

DX: Rather than individual skill bonuses, a tail could justify purchase of DX itself. (However, a limited form of whole-body DX is more appropriate; see the Athletic-only limitation below.)

Limitations: Apply any of the following cumulative limitations to the skill-related benefits above. (These do not apply to Grasper or Striker, which already presume abilities dependent upon a limb.)

Tail (-10%): The added traits are dependent upon free use of the tail, and are lost if the tail is crippled or otherwise hampered. (Without this limitation, benefits are inherent in the creature overall, and are not specifically aided by the tail.)

Counterweight (-15%): The tail is particularly vital in athletic tasks; if crippled or otherwise hampered, any tail-based bonuses are lost and become equivalent penalties instead. (Note that B553 already suggests simple DX penalties for creatures losing tails. Purchasing tail benefits with the Counterweight limitation replaces those suggestions as a method for dealing with tail loss, at least for creatures you’re building in detail.)

Athletic-only (-25%): This is a limitation on purchase of DX. Athletic-only DX affects full-body actions only, including athletic skills, melee combat, and Dodge; it does not aid missile TH or fine tasks per High Manual Dexterity. When in doubt on whether to apply Athletic-only DX, halve its bonus (round down).

Prerequisites: To function as an Extra Arm or Striker, a tail will likely have to be heavy, with a length determined by the relevant rules.

To grant skill or DX bonuses, you can optionally require minimum tail length. A tail must have a minimum length set by (character SM – 4, +1 per highest bonus) if heavy; add another +1 for a slim tail. (Treat Perfect Balance as a +4 bonus.)

There, a rough new version of tail design. But a few questions for readers:

1) Is there already a canonical treatment of tail design in 4e, other than Extra Arm and Striker considerations? I can’t find anything in Powers, and Bio-Tech only looks at Striker and Grasper uses.

2) You’ll note that I neglected to provide a cost for skill bonuses. The rules for Talents don’t really apply here. (I suppose you could bundle up skill bonuses into a talent, and even apply the limitations for Tail and Counterweight – though that’s some cheap bonuses!) I used +2/level for individual skill bonuses in GULLIVER, but what would be a good value for 4e, if there’s not already something in the rules I’m missing?

3) How do my limitation values look? I used -25% for Athletic-only DX, as that’s what I used in GULLIVER Mini. (Should it also have a lesser version, which excludes melee combat and Dodge?) For Tail itself, I like -10% as a counterpart to the all-round -10% limitation for “power frameworks” like magic, psi, etc. As for Counterweight, its combination with Tail and Athletic-only create a neat overall -50% limitation on DX, which is what I had used in the old GULLIVER (though with somewhat different effects than I offer here).

Using all three limitations, you can build a tail that offers, say, +1 DX for a bargain-priced 10 points – but that DX doesn’t apply to fine manual tasks or missile fire, requires unhampered use of your tail, and converts to a -1 DX if your tail is crippled, grappled, etc. What do you think?

With the above questions tidied up, I think we’ve got a fun new bit of detail for 4e designs. Oh, how about that gecko? Given its skillful tail deployment in just about everything (including default Aerobatics), I’m thinking it has a heavy tail offering +3 DX, with the Tail, Counterweight, and Athletic-only limitations. (That general setup is an easy and realistic way to design lots of creatures.) A cat? Maybe the same DX bonus but at +2 (definitely a slim tail vs the gecko’s heavy), or perhaps with bonuses more limited to Balance, Acrobatics, and Jumping only. (Anyone have a cat with an opinion?)

Fun stuff. Stay tuned while I (or you?) mine more character-building stuff from those old Book 3 remnants.

Now watch that gecko in action!