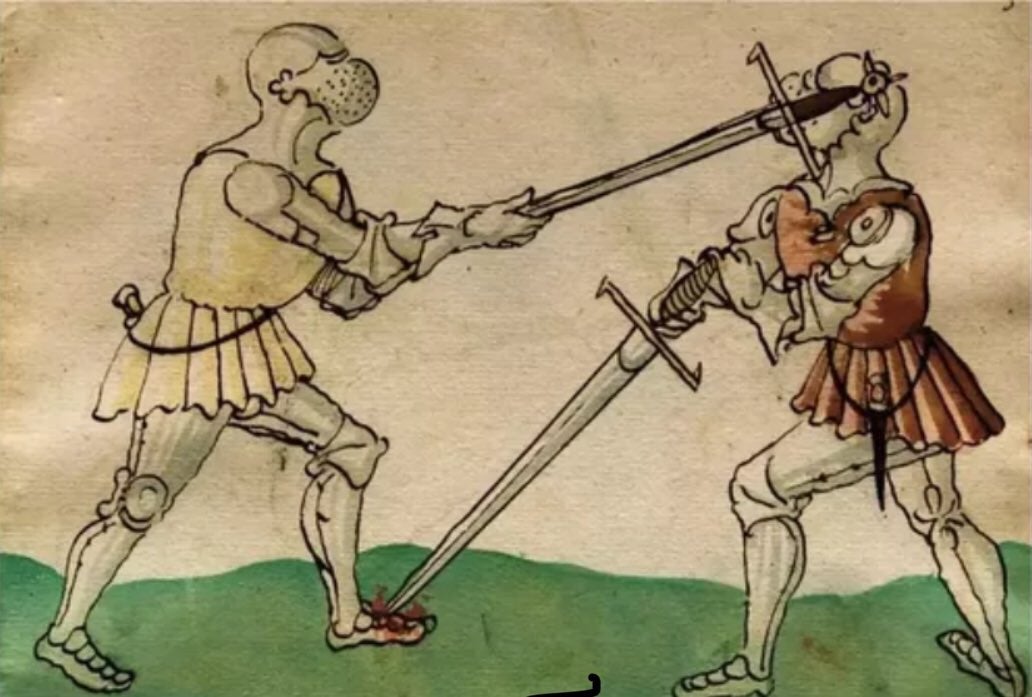 Welcome back to Dork Labs (a name you can count on to mean “spreadsheets will follow”). In writing an upcoming post involving strength and damage, I had reason to revisit an old question of mine: in an ideal GURPS, how much should ST-based swing and thrust damage differ?

It’s by no means a pressing matter at anyone’s game table, but on the off chance that someone finds this of interest, and continuing this site’s hallowed tradition of yammering incessantly about all things ST for reasons only Yog-Sothoth can divine, here’s what the numbers show.

Swing vs thrust, by the numbers

The table below is self-explanatory. At left are ST-based thrust and swing damage rolls, straight from the GURPS Damage Table. This is followed by average points of damage.

Boring stuff so far. But next are the columns in blue that are at least a little interesting: swing minus thrust, showing the difference between those average points of damage (i.e., the extra damage you get from a swing); and then swing divided by thrust, showing the multiple of average swing damage to thrust damage (the sw/thr multiple, let’s call it).

What’s with the extra columns at upper right? For low ST scores, minimum damage rolled is 0 for a blunt weapon but 1 for an edged weapon, which changes average damage scores. So for ST 1 to 10, peep whichever set of numbers is of interest to you.

What’s interesting up there? Nothing much, in that players of PCs with ST in the typical “adventurer range” (ST 10 to 20, at least for a lot of campaigns) already know that swing damage is typically 2 to 5 or so points higher than thrust damage, or generally close to (if not quite) twice thrust damage, before further modification for the weapon used.

I don’t see any surprises on the table. A few observations all the same:

Is there a point to this?

Not really, beyond the curiosity value of confirming that swing and thrust damage do indeed behave as we pretty well know. But a minor thing I’ve pondered before is this: how much higher should swing damage be? That is, what should be the swing/thrust multiple? Not in terms of “realism” – who knows how you’d figure that – but in terms of game play?

What’s the game play issue here? It’s a small thing, but I’d say it’s this: An ideal design makes both thrusts and swings valid choices in melee. Like this:

Say your base swing damage is twice your thrust damage, as it is for many PCs. You pick up a weapon – a smallish club or the like – that delivers straight thrust crushing and swing crushing damage, with no other special features to worry about (like unreadiness after a swing).

If the weapon is blunt, there’s no question how you’ll want to use it: you’ll swing it to get that double damage. Pretty much always. That’s dully predictable, but hey, it’s a club. The swing is the thing.

Now make that stick metal and sharp to create a Basic Set cutlass that deals thrust impaling or swing cutting damage. Your thrust now gains a superpower: double damage from impaling! With that massive boost, a thrust to the torso is now… uh, still inferior to the swing. A stab with your cutlass delivers twice your thrust damage, but a chop inflicts three times your thrust damage (twice thrust damage for the swing and a x1.5 multiplier for cutting).

Hold on, your blade also has a special way to stab: a thrust to the vitals! That triples your thrust damage, making it… er, as good as that chop at delivering damage, but no better. Yet this particular thrust suffers a big TH penalty. Worse, if the foe is wearing armor over those vitals, your stab’s lower basic damage makes it inferior to the chop all over again.

That’s what I’m talking about. GURPS is cool in that what the hoplologists call “cut-and-thrust” weapons actually deliver distinct cuts and thrusts in the game, each with its own strengths: more powerful blows for the cut, a bigger damage multiplier for the thrust (usually). But when a cut-and-thrust weapon’s base swing damage is twice its base thrust damage, the thrust becomes pointless: it can only catch up to the cut’s damage by targeting a difficult location, and will always lose the damage contest if the target is armored.

I’m not saying stabs are useless! A few weapons, like long spears and polearms, can stab at very long distances without the slowness of swings. Stabs are the normal way to target particularly high-value locations like eyes and gaps in armor; there are even stabbing weapons like the estoc that lessen the extremely high TH penalties for these.

So there are special uses for that pointy tip on your weapon, beyond just poking at the juicy parts of a torso. That said, edged cuts also have specialty powers. They’re far superior to thrusts in crippling a foe’s limbs, and far superior again versus certain monster types (like weird homogenous creatures). When hewing necks, cuts enjoy both high basic damage and a powered-up damage multiplier. And, of course, a cutting weapon, not some poking thing, is what you need for hacking at jungle vines and locked treasure chests.

In the battle between cutting and impaling, we can call the “special features” competition a wash. Let’s go back to plain old “hacking and stabbing the torso” combat. Shouldn’t the sw/thr multiple ideally be lower, so stabbing is actually a valid option once in a while?

The article Rules Bit (GURPS): New Damage for ST addresses a separate (and similarly unimportant) topic: damage scores that scale more neatly with ST (as in, “hey, like, what if damage were 1d per 10 ST?”). Setting that topic aside, the article also took the opportunity to ponder that matter of an ideal relationship between swing and thrust damage. There, I propose a sw/thr multiple of 1.5.

The appeal should be obvious. When a weapon’s swing damage is 1.5 times its thrust damage, cutting remains the favored option for general unpenalized mayhem: its damage of (thrust x 1.5 for swing x 1.5 for cutting) beats a stab’s damage of (thrust x 2 for impaling). That superiority only increases when the foe is armored. But at least against an unarmored foe, the stab can out-damage the cut by targeting the vitals. The result: “Hm, my cuts do more damage… unless I take a penalty and stab for the heart. Which should I do?” That sort of choice is fun.

The multiple doesn’t have to be 1.5; it could be 1.8 or 1.7 or whatever is less than 2.0 and yields good results. Make it phi (1.618…) if you like. The bounds are simple, where abusing a foe’s unarmored torso with a cut-and-thrust weapon is concerned: a sw/thr multiple of 2.0 is too high, as there’s never an advantage to the thrust; and a sw/thr multiple of 1.33 is too low, as there’s no advantage to the cut vs an unpenalized thrust. (Math: thrust damage of (thrust x 2 for impaling) is just as good as cutting damage of (thrust x 1.33 for swing x 1.5 for cutting).)

So. Looking at raw swing and thrust stats, an ideal sw/thr damage multiple would be 1.5 or 1.7 or so. Sounds good, right? Yeah, it does. Except: Does that still hold with actual game weapons in hand? Let’s see (using newer weapon stats and new weapons from Low-Tech or DFRPG as examples).

What’s left out of the above calculations is the damage adds of specific weapons (i.e., the “+2” and “+1” of a broadsword’s thr +2 imp, sw +1 cut damage). If these adds didn’t significantly change sw/thr multiple with the weapon in hand, it’d be a moot point. But the adds typically do change things.

Other weapons’ adds go the opposite way. An excellent example is the edged rapier: at ST 10, its adds change the wielder’s base thr 1d-2, sw 1d damage to thr 1d-1 imp, sw 1d-1 cut damage. With a sw/thr multiple of 1.0, the edged rapier’s base thrust damage is as high as its base swing damage!

Let’s check out a few more weapons with thrust impaling and swing cutting modes, over a range of ST. The purpose is to examine not the raw sw/thr multiples on the Damage Table, but the actual sw/thr multiple you get with the weapon in hand.

Looking again at the case of thrusts and swings to an unarmored torso: For all of the examples shown, sw/thr multiple with the weapon in hand is well below 2.0, meaning a stab to the vitals delivers more damage than a cut. For the entries with sw/thr multiple below 1.33, a stab defeats a cut in damage even without aiming for the vitals! And when the multiple is as low as 1.0 (i.e., base thrust and swing damage are equal), as with a shortsword at ST 9 or an edged rapier at ST 10, not even armor changes the superiority of the stab.

For most of the above examples, swings do maintain an edge in basic hits, a big plus in their favor when the foe is armored. But for all of the table entries, thrusts remain a valid option in at least some circumstances.

I don’t plan to create a huge table exploring thrust vs swing for dozens of weapons; have at it yourself if interested. (A technical note: Be careful when figuring low-ST average damage, as in the shortsword entries. Taking into account the “minimum 1” damage for an edged weapon, thrust damage for ST 8 averages 1.5 points. Bringing in the shortsword’s thrust damage add of +1 doesn’t raise this to 2.5. Rather, it raises ST 8 base thrust damage from 1d-3 to 1d-2. Average damage for 1d-2, taking into account the “minimum 1”, is 2.0. It’s easy to make a mistake here!)

For now, my takeaway from the above is this:

Looking at raw thrust and swing damage alone, where sw/thr multiple bounces around 2.0 or a bit less for typical PCs, thrusts get the short end of the stick. It’s rarely worth it to stab instead of chop.

The damage adds of weapons, however, change things considerably. Some weapon stats exacerbate the above; a falchion’s stab is hugely inferior to its chop. But typical cut-and-thrust weapons go the other direction; in some situations, a stab with these is deadlier than a cut. Make that most situations for particularly good thrusters, like a shortsword or edged rapier!

Huh. It’s almost like GURPS has its chop-optimized and stab-optimized weapons behaving like they should, without further fiddling. Which in turn suggests that the game just might know what it’s doing, more than a certain dilettante armchair pundit sometimes realizes.

So. Do I still think that the raw sw/thr multiple should be lower than it is? Mmm, yeah, I think it’d ideally be less than 2.0 for all ST scores, so that stabs have basic utility even when a weapon’s damage is an unadorned “thr imp, sw cut”. Perhaps not as low as the 1.5 I had suggested, though. I think 1.7 or so feels right. But the game already comes reasonably close to that. While the raw sw/thr multiple between ST 10 and 20 often hits or exceeds 2.0, it [checks spreadsheet…] averages 1.88 in that range. That’s not bad!

Most importantly, when typical PCs wield typical cut-and-thrust weapons, sw/thr multiple dips quite low, giving stabs a solid role in melee. Setting aside any quibbles about this or that specific case, I’d say there’s no call for an urgent crusade to reform the swing vs thrust damage stats of GURPS!

(Unless, of course, you want to get rid of a ST-based swing damage stat altogether, arguably a worthy idea. But that’s its own topic.)

There. I can now go back to whatever I was writing about ST and damage before I fell down this rabbit hole. Stay tuned. (If you can stay awake.)

Header image: Moe swings a mean mordhau, but my money’s on Curly. Woob-woob-woob! (Jokes aside, these knights are dealing legitimate strikes – both of which are distinctly game-able in GURPS.)