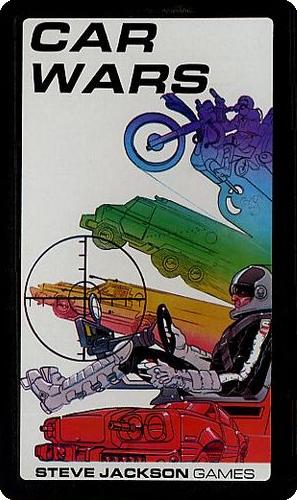 Know what was odd about the old Car Wars game? As its weapon-laden autos blasted away at each other with rockets and worse, just about everything would get damaged and damaged good: vehicular armor, engines, weapons, trailer hitches, you name it. Tires got shredded, buildings breached, drivers and pedestrians blown to bits. Everything…

…except the vehicles. There were no hit points or the like for a vehicle itself, and no way to directly hurt it. Sure, with its engine or tires or driver shot to shrapnel, a car was “killed” for purposes of combat. And in one specific exception, an explosion caused by fire did invoke a special “vehicle completely destroyed” rule.

But otherwise: The motorbike with its engine blown up by a tank round? The helicopter with nearly every component shot out by rocket launchers? The car that lost its tires, underbody armor, and driver to mines before slamming a wall at 200 mph? Clear out the bodies and the broken parts, install new components, and the vehicles were as good as new. (“That’ll buff out” is clearly the Car Wars motto.)

Very odd, that was. (But darned fun all the same.)

Hmm, here’s something a bit sad: Steve Jackson Games’ Car Wars web site has seen exactly two posts since the end of 2003. (Even this site posts more frequently than that.) Ye gods, does no one play this fine game any more?