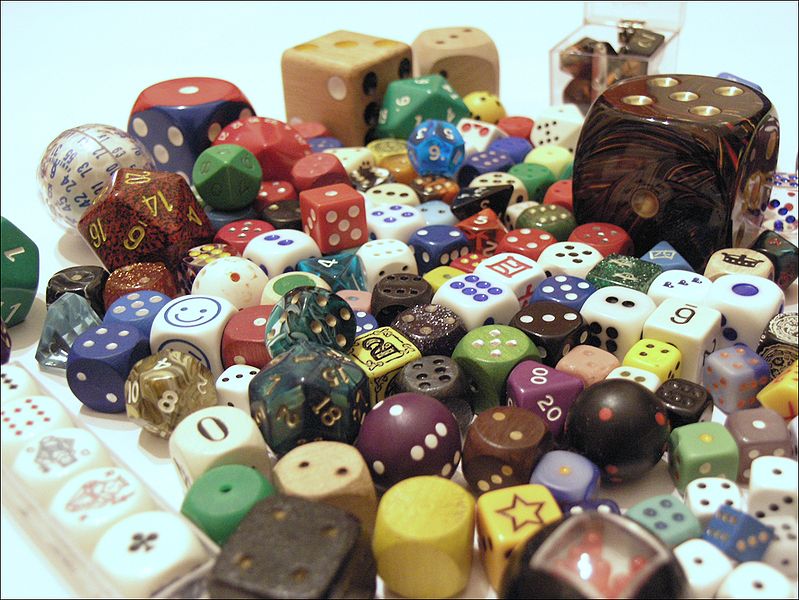 To be sure, that’s not how the game itself describes things! Both GURPS Basic Set and GURPS LITE note those rolls as “three basic ‘game mechanics'”, not “three kinds of dice rolls”. That sounds fine to me, depending on what defines “game mechanic”. No further comment from me on that!

But about those “three types of dice rolls” mentioned by many a player: Yep, success rolls, reaction rolls, and damage rolls are indeed three kinds of rolls, and they’re darned important ones at that. However, I don’t think of that trio as making up some “three types of rolls” that define the game – especially when there are so many rolls that they don’t cover!

There’s no end to the types of rolls in GURPS. We’ve got rolls for success, reactions, damage . . . and for table lookups, lengths of time, number of items, all kinds of miscellanea. There are 3d rolls for random hit locations, critical hit results, and much, much more. Roll 1d to check whether your rapier breaks on a parry (and then 1d to see how it breaks); roll another 1d to check for scatter when you throw a grenade. Failure on the Teamster skill can provoke a special 2d check for a broken animal leg; if you’re a mounted rider instead, there’s a 2d table of various results for loss of control. (Did you roll “loose saddle”? Take 4d seconds to fix that.) Roll 2d+2 for the number of months Regrowth requires to replace a leg; roll 1d+3 (or whatever the GM rules) for the number of orcs in a wandering patrol. And on and on.

The way I see it, GURPS does indeed have “three kinds of rolls”, but they break down to these three:

“Success roll” maybe isn’t the greatest name, as you’re not necessarily looking to check success/failure – but you very often are, so the name will do. They key point is that you’re generally looking for a binary outcome; “roll under some target number” is how it’s done.

In many situations in GURPS, the degree by which you rolled under or over the target is noted, as margin of success or margin of failure. In that sense, a success roll can also measure an abstract “amount of success”, which blurs the line a bit with the following roll:

These are rolls that generate some amount of stuff. Roll 5d seconds for the number of seconds a limb is paralyzed by the Pressure Points skill, 2d+2 for the number of hobgoblins in a room, 4d+10 copper plus 1d silver for the treasure they guard, and so on.

While amount rolls are typically used to generate concrete values like lengths of time or number of items, they work fine for “amounts” of abstract things as well. A damage roll is a perfect example: it’s an amount roll to generate an amount of “damage” (whatever that is)!

Some game systems arguably blur success rolls and amount rolls by using the same basic “higher roll means more” mechanism for both. That is, a roll of d20 + mods to check success against a target number is essentially rolling “amount of success”, in a way not really different from rolling, say, amount of money in a purse. As noted above, margin of success/failure blurs the line in GURPS as well. But GURPS uses distinctly different mechanisms for success rolls and amount rolls, so I’ll count them as separate things.

Roll the prescribed dice and check the result against a table. Roll on a wandering monster table to see what wanders in, roll on a random treasure table to see what types of goods are in the pile (followed by amount rolls for each type), check a critical miss table to see what hilariously awful thing happened to your knight, etc.

Table rolls don’t necessarily look like tables! For simple ones, text is all that’s needed. Take the example above of a failed Teamster roll: should you fail a success roll and spill your wagon, Basic Set suggests that you roll 2d for each animal on the team, with a 12 indicating a broken leg. There’s no table needed for something this simple, but all the same, you’re essentially rolling on a 2d “table” that reads “2-11: No further damage. 12: A leg is broken!”

Table rolls are often a straightforward 1 die or 4 dice or whatever, but some do use variable modifiers. A good example is the reaction roll. While an influence roll is a success roll, a reaction roll is clearly a table roll, using 3d plus a host of reaction modifiers. Roll the bones, add the mods, and check the result on the table. (Ouch, bad roll. The starport administrator sneers as he presses the “OPEN AIRLOCK” button.)

As noted, success rolls take on a wee bit of amount-roll flavor when margin of success/failure is checked. Similarly, a reaction roll blurs the line a bit between table roll and amount roll. It’s clearly a roll that sends you to a table, but it’s also a roll in which 3d + mods generates “amount of like” (or “amount of goodwill”, or whatever we could call it). If you’re willing to look at a reaction roll that way, it’s another example of an amount roll that can be used for abstract things, not just physical things.

You’ll find little subsystems in GURPS that put all three kinds of rolls to interesting use. Take the Fright Check. Its initial Will roll is a success roll. If that fails, the next step is a table roll using 3d + the Will roll’s margin of failure. Many of the table results will generate additional rolls, such as an amount roll for length of time stunned, followed by success rolls to snap out of it. As dice mechanics go, it’s a little bit of everything!

Do me a Platonic solid

For most game systems, how many dice to roll will follow a pretty obvious system. For amount rolls and table rolls, you’ll of course toss as many dice are called for to generate an appropriate amount, or to match the entries on a table. Success rolls, meanwhile, will likely use some fixed number of dice: always roll this many dice, and read the result like this, to determine success or failure. (Some games may get funky even with success rolls, though, with systems that involve dice pools of varying size, special results assigned to particular die faces, and so on.)

Where things get interesting is the shape of dice to roll. Games like GURPS and HERO make it all work with d6 cubes only. Other games go for fancier dice – perhaps the d10, or a pair of d10 acting as d100, or – an ever-popular favorite! – a full polyhedron set consisting of that d10 plus the Platonic solids of the d4, d6, d8, d12, and d20.

Where success rolls are concerned . . . well, what dice to use is a matter of pros and cons and preferences that the systems nerds enjoy arguing over, but different preferences can all be pressed into perfectly workable methods. I like GURPS‘ 3d6 for its nifty “bell curve” effect; other people like the wilder results of a single d20. Whatever the preference, most games are happy to stick with one shape of die for all success rolls.

But where amount rolls and table rolls are concerned . . . ah, that’s where those weird dice bring something to the game. With only d6 dice to work with, amount rolls and table rolls have to adopt pretty limited forms: a range of 1 to 6, or 2 to 12, or 3 to 18, and so on, or maybe the more involved sort of table that reads two dice separately to generate 36 possible results (from 1,1 to 6,6).

It’s fine. It works. The simple d6 even has some tricks up its right-angled sleeves, like faking fancier rolls through simple fudges. (Need to randomly roll one of the four seasons? Roll 1d6 and re-roll a 5 or 6. Instant fake d4.)

Also keep in mind that if average outcomes are the important thing (as in many amount rolls), fancy polyhedrons add little to the d6’s powers. That is, you can represent the damage for more powerful versions of a mage’s d6 fireball by bringing in a fancy d8, d10, and d12 – but you’ll just be dealing the same average damage of a humble d6+1, d6+2, and d6+3, respectively.

A final great thing about the d6 is its ubiquity. You can always find one. Rifle through the family junk drawer. Raid the old Milton Bradley board games. Grab some paper-wrapped sugar cubes and a pen.

As the examples suggest, such tricks can be more fanciful than useful. And even a set of polyhedron dice doesn’t let you roll everything without fudging. (Need to randomly select one of the 11 orcs in the cellar? Uh, there’s no d11 – though a d12, with the 12 rerolled, will do!)

I have no deep thoughts on all this. I’ll just note that, when generating amount rolls and table rolls, varied dice shapes aren’t the end-all, but they do have their charms. (Needless to say, there’s nothing stopping you from pressing those polyhedrons into the service of your custom amount rolls and table rolls in GURPS, or any other game using limited dice shapes!)

There you go: success rolls, amount rolls, and table rolls, the three types of rolls in GURPS (and a lot of games). At least as I see ’em.

But do those three really cover everything? Am I overlooking some fourth (and higher?) distinct types of roll?