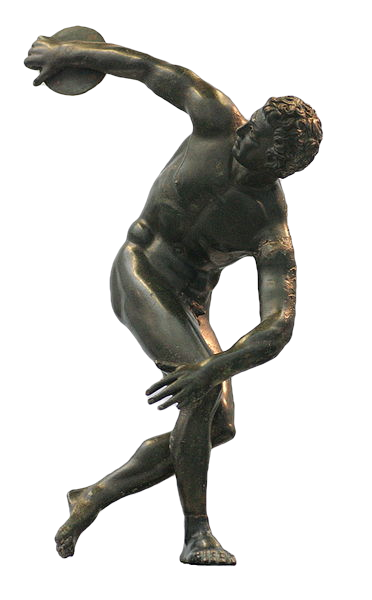 The old GULLIVER for GURPS 3e details throwing skills for use in sports, not combat. Generally, I’ve suggested a hefty distance bonus in exchange for several drawbacks: encumbrance penalties, a Ready requirement, and a big TH penalty. (Yes, a TH penalty. Track-and-field javelin, hammer, discus, and so on never require the thrower to actually hit something. What the heck? Let’s get some man-sized targets out there, and go Spartan on the next Olympiad!)

Come to think of it, perhaps these special skills can be built nicely using COSH, the system for modifying and building combat skills in 3e. Hmm, it’s worth a try! If this sort of thing piques your rarified interests, break out the COSH page along with a copy of GULLIVER LITE for 3e and read along:

In COSH, Thrown Weapon skills start with the limitation Few Maneuvers (-1), which is what turns them from the default Average skills into Easy skills, the difficulty that GURPS decrees for throwing skills.

Now let’s add tweaks for our specialized sports skills, the first of which is a little complex. The GULLIVER rules suggest a -4 skill for any throw made on the run, a penalty which the sports skills buy off. (Call the twirling of the hammer or discus toss a special-effect equivalent of running.) On the other hand, the sports skills take an all-round -4 TH, should they be used against a target.

Let’s call the former enhancement Throw on the Run (+1), which buys off the skill penalty for movement. Let’s call the latter limitation Takes TH Penalty (-1), which confers the suggested -4 TH.

To round out our sports skills, COSH already offers Offensive Encumbrance Penalties (-1/2). (The full -1 available for both offensive and defensive Encumbrance Penalties isn’t valid; throwing skills don’t include defense to begin with.) On top of that, let’s invent a Requires Ready (-1/2) limitation and a Distance Bonus (+1) enhancement, with the latter confering the suggested +10% distance per point of skill above 10 (or point of success on skill roll).

The added tweaks cancel out, leaving us at the initial, GURPS-friendly Easy level. Nice!

What of the enhanced sport skill for baseball pitches? The rules suggest the same Requires Ready and Offensive Encumbrance Penalties effects as above, but also many enhancements: a distance bonus boosted from 10% per point to 20%; a boosted distance bonus for AoA; a distance bonus from an explosive Step equivalent to the bonus from running; and an odd restriction to “flat” throws only, taking no skill or TH penalties for such a throw, but a full -4 skill penalty for higher-angle lobs. While that’s a brimming basket of tweaks, the combination does allow for realistic Major League hurling speeds and accuracy, without making Pitching the ideal skill for distance throwing as well (due to the flat throw restriction).

Let’s see what we need to change. First, some unneeded bits: We’ve built Throw on the Run (+1) into sports skills, but we should ditch that, as there’s no way to throw a proper pitch while running (or twirling!). On the other hand, with fastballs, curveballs, knuckleballs, sliders, and more pitches to master, I also suggest dropping Few Maneuvers (-1).

Next there’s our Takes TH Penalty (-1) for sports skills. We need to tweak that: The pitcher doesn’t take that penalty on a flat throw, but does take a full -4 skill, not just TH, penalty on any other throw. That sounds like a special-effect tradeoff to me. Let’s rename the limitation and keep the value the same: Takes Skill Penalty on Lob (-1).

GULLIVER for 3e suggests that an American football quarterback uses what is essentially a P/E combat throwing skill. Even under COSH, I remain happy with that; it’s a good example of how just because you can tweak a skill out the exhaust pipe doesn’t mean you have to.

First, the Takes TH Penalty limitation of other sports skills isn’t called for; unlike a hammer thrower, a quarterback does aim for difficult targets. Arguably, the Throw on the Run enhancement isn’t appropriate either; a quarterback often has to throw on the run, true, but he’ll always throw much better with a moment to hold still! And Requires Ready? No; quick snap tosses are part of the game.

In the end, a simple, full-fledged combat throwing skill works just fine. If you do want to make tweaks, though, try Offensive Encumbrance Penalties (-1/2), balanced by a similarly small enhancement, such as Enhanced AoA Distance Bonus (+1/2) or Explosive Step Distance Bonus (+1/2) from Pitching. Or perhaps invent Limited Throw on the Run (+1/2), which doesn’t erase the -4 skill penalty for running but does reduce it to -2.

That still leaves Quarterback Throwing a net Easy skill. Or, to take your game up a notch, add Distance Bonus (+1) and call it Average.

Those GULLIVER for 3e sports skills were written without COSH in mind, so it’s interesting to see whether they can be COSHified. Overall, I think the conversion works well! Needless to say, the neat results you see above come courtesy of setting new enhancements’ and limitations’ arbitrary values just right. But unless you see problems I’m missing, I think the values I’ve set are reasonable, not merely convenient.

How about it, COSH fans? I’ve made my pitch; any flaws in what I’ve thrown out?