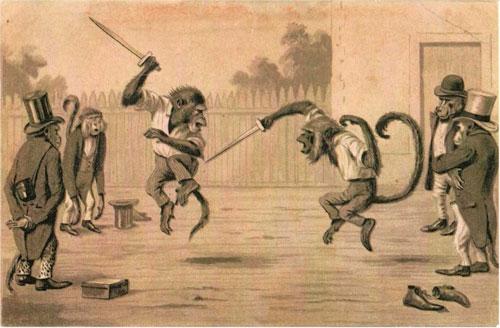 I won’t be able to post things next week, so here’s some recycled material for approaching visitors. While searching through old email, I found the following post I’d made to the Gurpsnet mailing list.

The response below to an inquiry may be of interest to fans of COSH, a fun tool for modifying and creating combat skills.

How does COSH handle defaults?

Nothing special included, or needed, in COSH’s handling of defaults — other than the question, how do you set defaults for new skills? Just as existing GURPS defaults were set (AFAIK) by SJG writers’ sense of what works, and not by formulae, I can only say that you’d have to do the same for your own invented skills.

One of the niftiest attributes of Spear skill is that it gives a good default to staff (which suggests that it does include swings).

I don’t know about that. There may be a Kromm ruling out there, but I know it’s a common question – “what’s the difference anyway between Spear and Staff?”

The implication for COSH is no different: whatever the skill defaults involved, you’re actually using the Skill A that you do have, and can make use of its abilities; you don’t actually gain the defaulting Skill B, and thus gain no new abilities by using the weapon normally associated with Skill B.

As for Spear and Staff: I don’t know that the existence of a GURPS cross-default should be taken to mean that both skills teach swing and thrust. I would assume that it’s something that SJG simply didn’t worry about back when GURPS was created. I don’t whether there’s a final SJG ruling is on whether Spear skill lets you swing without penalty.

Anyway, the COSH answer: If you knew only Spear, and that Spear skill was built as thrust-only, and you picked up a staff, you still only know how to thrust. Sure, you could swing the staff (or heck, swing a spear) anyway, but there should be a penalty.

And if you want to take a shot at setting such penalties based on some rules and guidelines, check out the suggestions in the Appendix of ESCARGO.

While those rules on defaults were created for use with a skill cost alternative that’s not very GURPS-like, they could be applied to your question on how to set defaults for new skills, based on the differences in use (swing vs thrust, etc.) and configuration (balance, length, etc.). Note that this allows for generous defaults not currently covered by GURPS, such as a cross-default between One-Handed and Two-Handed skills; I think that’s a good thing.

To apply this to Spear and Staff, or their COSH versions to be exact:

There are no differences between a spear and staff in configuration, and thus no default penalties from that. The only differences will be in use, based on what each skill includes in its training.

If you have Spear and pick up a staff, you can thrust with no penalty. You can do so with a two-handed or a one-handed grip, as these are included in Spear. But you do not get a 2/3 Parry. And if you decide to swing the staff (or a spear), you take a -2 skill penalty for lack of training.

If you have Staff and pick up a spear, you can thrust or swing with no penalty. You get a 2/3 Parry. Your grip is two-handed; should you switch to one hand, take a -2 skill penalty for lack of training.

That’s more detailed than GURPS’ all-round -2 cross-default, but certainly is more realistic to me.

If I learn a martial arts style represented as a single skill using COSH, I might want to learn another style and I’d expect to do a bit better than a rank beginner.

If the new style’s skill(s) have points in common with the old style’s skill(s), then you will do better than the beginner. You may be able to just add abilities to an old skill, so it now includes newly-learned abilities and fits into both styles. (See COSH example of “upgrading” Brawling to Karate.) Or if you do need to learn a new skill (which is likely, given that you can’t pack more into a skill than whatever fits into Hard), you can create a cheaper version that doesn’t duplicate abilities already covered by your old skill. You save points, and learn more quickly than the beginner.

Also, I’d like to design a skill with no direct combat effects but good defaults to *all* melee skills – for a character like Jackie Chan always plays, who can fight equally well with any object in reach. Then, after I sink the first 32 points or so to overcome the default penalty, I’ve got a true weapon master who effectively gains a level with *all* melee combat for every additional 8 points. From my bit of training in nin-po, this is not unrealisic; I learned moves designed to be effective with an open hand and even more effective with a weapon.

Sounds good, but keep in mind that COSH is nothing more than guidelines for breaking down existing GURPS skills into component abilities, and recombining those abilities freely. Beyond that, it can’t offer anything that GURPS skills can’t offer, including an uber-combat skill that everything defaults to. I have to leave creation of that to you.

Actually, the easiest way to model that ability is a plain old high DX. I know high DX gets derided by some, but for modeling a Jackie-like “good at anything” ability, it’s really a very nice solution, IMO.