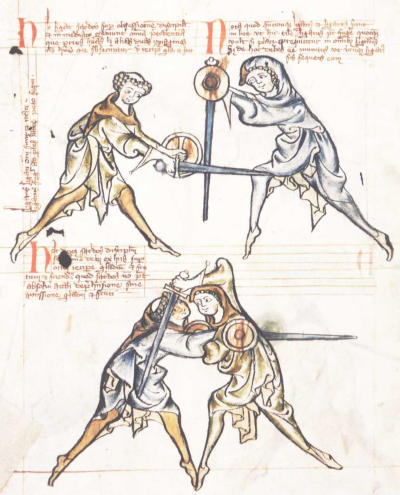 Here’s a minor melee idea that came up during chatter over GURPS combat scenarios. (I do plan to post an actual battlemap report after clearing some other items off of my to-post queue.)

When you close a distance gap to attack, you give the defender more time to react than you do by starting out close enough to strike. Game that consideration with this rule:

The first case represents the attacker having to first move to get within striking distance, which hands the defender a wee bit more time to prepare (as well as an extra, clearly visible indicator that the attack is coming).

The second case is the default combat norm: You’re already within range to strike, and you do so. Nothing special going on.

The third case helps model the “roaring and punching” aspect of close-combat free-for-all. Attacks come from so close, and thus come so fast, that it’s hard to defend against them (or even see them coming in the first place).

It’s all simple to play out when using a hex map. (There’s no bookkeeping; these mods appear and do their thing immediately at the moment of attack.) How does this change combat? Some ways:

All in all, it sounds like a nice package of fresh tactical considerations, with no GM burden beyond the usual totting of really simple bonuses and penalties.

(Oh, one simple option: If you like the idea but find the mods too steep, just halve them to +/-1.)

Any thoughts or similar play experiences on your side, dear Reader?