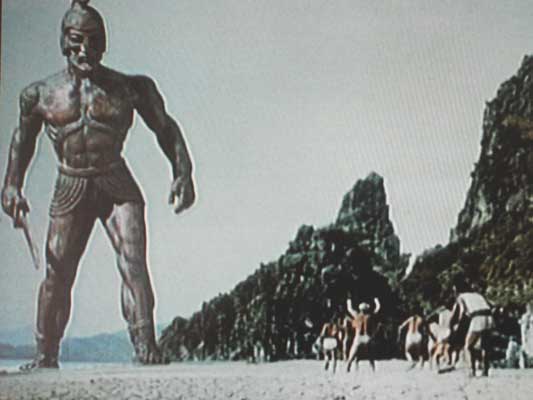 In a Gurpsnet thread on how to deal with Giant foes in combat, I commented on a GM’s concern about overwhelming the PCs. The discussion is for 3e GURPS; as 4e has pretty much solved 3e‘s problem with what ST to give a Giant, it’s not too interesting a discussion any more. Still, there may be some fodder there for Giantslayer PCs or their evil GMs. My comments in that thread are as follows:

Lots of people have offered good advice on how PCs should (and shouldn’t!) tackle a huge Giant in 3e. There are some very useful lessons in there for the PCs in any game.

I think one key question of the original post, though, hasn’t been addressed too much: how to handle the fact that a 12+ foot tall, ST 40 Giant will dish out damage along the lines of 4d+1 thrust, 7d-1 swing, against PCs with a fragile 10 HP or so. Depending on the specific circumstances, that’s a good possibility of one-hit PC death. A couple of thoughts:

1) Maybe that instant-kill effect isn’t so bad. It may feel a lot different from the RPGs players are used to, in which a 12′ Giant can’t typically kill a PC in one shot. There’s no reality-checking possible, so it’s a matter of whether you like the effect or not.

If so, and if the players come from other game systems, be sure they understand how the numbers work. It’s only fair that they not go into the fight with D&D-like expectations!

2) Whichever the preference above, GURPS generally wouldn’t go for that instant-kill effect. I say that based on the ST stats GURPS typically hands out for large creatures – in this case, ST 26 for a 12′ Giant in Fantasy Folk for 3e. That’s only 2d+2 thrust, 5d swing. Considerably less damage, though still plenty dangerous.

You may say, “But, a human scaled up to double height would be expected to have four times the strength, and that means ST 40+”. You’d be right. Unfortunately, 3e never got a handle on how this works; its damage and combat rules were designed with ST 26, not ST 40, double-size Giants in mind. (The disparity between listed ST and realistic ST isn’t huge in this case, but it gets bigger as the creatures do.)

Me, I cheat: I use GURPS‘ (or GURPS-like) ST for damage purposes, and realistic ST for lifting and similar purposes. I find it works great. If you want any more detail on that, and everything and anything related to building and gaming Giants, head here:
http://www.gamesdiner.com/gulliver

Anyway, best of luck to giant-slaying PCs. As others have noted, they can take advantage of a nice TH bonus vs the Giant (+2 for a twelve-footer; and while GURPS isn’t clear on the matter, that should apply equally to ranged and melee attacks), and should employ every nasty tactic they can think of.