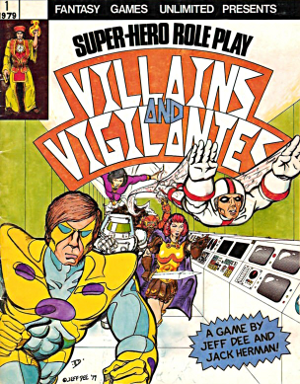 Maybe some allusion to “dead” superheroes always coming back to life is in order here, but I’ll just jump to the point: Slashdot reports:

Jeff Dee and Jack Herman, the creators of the old-school super-hero roleplaying game Villains & Vigilantes, have won a copyright and trademark lawsuit over the game’s publisher Scott Bizar of Fantasy Games Unlimited. Magistrate Judge Mark E. Aspey of the U.S. District Court of Arizona ruled that Jeff Dee and Jack Herman own the rights to the game based on the 1979 contract they reached with Bizar. The court also found that Bizar never had the right to sell derivative products or ebook PDF editions, which are a big deal to tabletop publishers these days.

Now, I don’t pretend to report on the gaming industry, of which I am no professional part. I mention this story for reasons of personal interest:

To be honest, V&V is not a game I love as a system. D&D-like levels in a superhero game? A weird power-vs-defense table to figure TH rolls? The game has some good stuff (I like the Encounters & Occurrences generator, and of course I like the artwork!), and I appreciate the charms of some “old-school” mechanics, but overall, I prefer the many advances game systems have made since. (GURPS, ya spoil me.)

Still, I maintain a nostalgic fondness for V&V. Cheers to Jeff Dee and Jack Herman on recovering their creation! I look forward to seeing what they do with it.