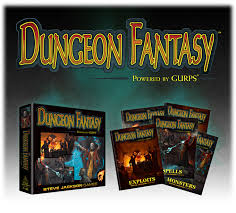 Hey, GURPSters! Eager to scry even one more crumb of information and/or rumor about the in-development, powered-by-GURPS, and eagerly-awaited Dungeon Fantasy Roleplaying Game from Steve Jackson Games?

Crumb ahoy! Here’s a tiny (and speculative) morsel from – of all places – recent The Non Prophets podcast episode 16.02.

Hm? A GURPS tidbit – in a podcast focused on religion and gods and related topics? It’s not so surprising, given that the podcast is based in the home town of GURPS – and that it’s hosted by two bona fide gaming art gods.

Just around 5 minutes into the episode, regular host and Art God #1 Denis Loubet reports that he’s working on the art for a new set of Cardboard Heroes. Yep, the classic SJG product from way, way back, inked at the time by none other than Denis, who notes here, “That’s the thing I did in the earliest part of my career. So my career’s come full circle.”

In response, regular host and Art God #2 Jeff Dee notes that Denis created that early art for “a company here in Austin”.

Hmm, I don’t need the Intuition advantage to guess who that is. But in case you need to be sure:

Denis: “There’s about 50 characters… It’s for a particular adventure. So some of the characters are very specific.”

Jeff: “So the adventure will come with its own set of Cardboard Heroes.”

Jeff: “That’s interesting. Is it a GURPS thing?”

There you go. New Cardboard Heroes, for a GURPS adventure. And what adventure could that be? Well, our deities of drawing didn’t divulge, so I don’t know. But I’ll bet all my copper pieces that the art is bound for the boxed Dungeon Fantasy Roleplaying Game, and we already know that Cardboard Heroes and an adventure will lie within that treasure chest.

If so: Awesome! Without giving the game components much thought, I had expected that the box would come with some sheets of the old, classic Cardboard Heroes. And maybe it will – but the possibility of added new figures, penned by The Master himself, is really nifty.

Incidentally, while we’re gleaning miniature intel from the podcast, special episode guest host Manda Dee (spouse of Jeff, I believe; whether also a gaming art god or not, I don’t know) notes that pewter miniatures are all “limited edition art” in a way that people don’t realize: the molds for miniatures are only good for a couple thousand reproductions, after which new molds are needed. Following that, Denis notes production issues with early printed Cardboard Heroes, and the improvements made possible by modern printing technology. And after that, Jeff offers a short update on his Villians & Vigilantes game and associated artwork.

The gaming stuff covers just a few minutes; give a listen if interested (and stay for the rest of the podcast if you like).

PS: Denis, I want the below printed on the side of my future Chevy Astro van. (Which will have a fuzzy 3d6 hanging from the rear-view mirror.)