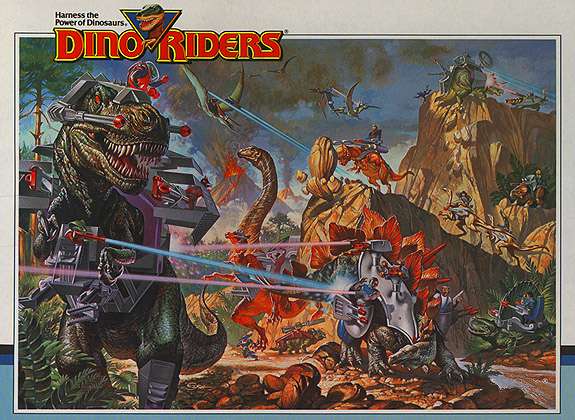 Here’s a collection of online bric-a-brac with connections to this site’s gaming material:

Dinosaurs and their tails

Having written about both dinosaur design and tail design, I can’t help but comment on the Smithsonian blog’s report that dinosaurs may have had thicker, beefier tails than often depicted. Sounds fine to me, at least until we get that cloning process working to verify things.

What does that mean for critter design? Well, nothing, really. About all I can note is that, using the above tail rules, your dinos really should go for the heavy tail option instead of the slim version – although that always sounded right for dinos anyway. Hmm, the article also suggests that the extra tail muscle may have aided running speed, so that’s another argument for fast dinos – though, as noted in my dino piece above, it’s always been sensible to just make up whatever speed the game action calls for.

All right, so I have no purpose in noting this bit of news. But hey, it’s about dinosaurs.

Tyrannosaurus Had Extra Junk in the Trunk

As are axes, and spears, and any edged weapon, when they whack an armored target into pudding beneath his stout, un-penetrated metal. That’s the premise of my Edge Protection rules, and the gist of findings from test cuttings and battle reports. As compiled in the article linked below, many writings tell of medieval knights left roundly bruised, stunned, and fractured by edged blows that failed to break the armor but still delivered massive crushing wallops to flesh and bone.

The EP rules neatly inject that outcome into GURPS, with interesting related effects like boosting the appeal of maces – the other knightly weapon – when facing armor-clad foes. Give it a try!

Glancing blows do glance off

Who’da thunk. The general fact is obvious, but it’s interesting to see research on the additional kinetic energy needed to pierce armor with arrows when striking at specific oblique angles. It fits right in with my DR-enhancing rules for grazes – though seeing as how it apparently takes a pretty severe angle to double the KE requirement, perhaps my use of doubled (and greater) DR is a stronger multiplier than reality calls for?

Speaking of KE, I have a geeky interest in that old chestnut of RPG simulation fetish: What sort of physics actually create the “damage” from a sword, club, or bullet? Is it all about momentum? Kinetic energy? Impulse? What?

I’ve been poking into that heavily of late (and in fact have been doing so on and off for years…), and am finally coming to see the big picture. After sifting through academic papers, testing reports, physics treatises, enthusiast forums, and much more, I’m ready to reveal what I’ve learned from countless helpful sources. Get ready; here’s The Answer! In helpful bullet-point form:

Really, do a little digging, and you’ll be amazed at the amount of debate and science and conjecture that comes to nothing concrete. Observe the rampant non-agreement over the respective roles of energy and momentum! Thrill to academic papers that compute punch impact from the mass of a hand vs those that use the mass of a whole arm vs those that use the mass of the whole body! Gaze upon “Physics and the Martial Arts” treatises that say nothing useful at all!

Of course, there are also some really good research and resources out there. And if there’s a lack of a grand Big Answer, perhaps it’s because this genuinely is a complex matter, with no easy, simu-riffic master formula that plugs into a game engine.

The bright side for the armchair game designer is this: With no known “correct” answer to exactly what a thrust sword’s mass and velocity mean for penetration and wounding, simulationists have a lot of leeway in turning those inputs into whatever outputs feel right and play well. There’s even a bit of such “nobody really knows, so I went with this method” to be found in Interior and Terminal Ballistics for GURPS, one of the best pieces of work you’ll find on such topics (and whose author has been very helpful in explaining aspects of his methods to me). If you want nifty universal simulation of bullet effects, you won’t find better!

So with nifty examples like that leading the way, I trundle along toward my own ideal system that’s always lurking just out of sight – but which, I’m happy to say, is lately becoming much, much clearer. Simulationist geeks, stay tuned!