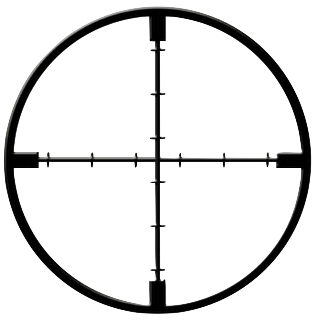 D. Cole, an inveterate rules hacker, Pyramid contributor, and GURPS community guru on things gun-, bow-, and armor-related, is posting plenty of good stuff on his Gaming Ballistic blog. If you’re the sort of gamer who likes this site, you’ll probably like his even more so. Hie thee to it.

D.C.’s recent post Shoot/no-shoot: checking fire under pressure resonated with me, because I’d pondered something similar in the past: In a game’s ranged fire rules, is there a way to simulate the act of “lining up” your sights, only firing when you’re “where you want to be” (as D.C. nicely puts it)?

As noted there, this can involve highly variable timing, and thus isn’t quite what GURPS’ existing Aim maneuver statically delivers. Here’s the sort of thing I had considered a bit:

The term I’d worked with is “drawing a bead”, that act of trying to follow and/or lead a difficult target until timing, target motion, shooter motion, stability, and any other key factors converge on “Shoot now!” The obvious game effect, of course, is that the shooter spends extra time – a variable and possibly long amount of time – in exchange for added accuracy.

I had decided that while the rule might realistically replace the existing Aim rules, I’d prefer it remain an option, used only when a shooter is willing to accept its tradeoffs (and any extra complexity). That means the option needs to coexist with Aim, with neither maneuver the across-the-board better choice.

The basic mechanic of my Draw a Bead maneuver was a roll to “mark” the target, with success providing some TH bonus on the subsequent fire action. Using a roll adds a small in-game burden, but it’s what creates the uncertain timing that the existing Aim bonus lacks.

I figured that the Draw a Bead roll should be the same as TH itself, but at a hefty skill bonus, as it only gets the weapon oriented well enough to at least inspire confidence in shooting (while not necessarily well enough to actually hit).

Example: Jim has a poor roll of 8 or less to shoot a difficult target. He decides to roll Draw a Bead, which gets a +4 skill bonus and thus rolls against 12.

Jim should definitely also use Aim. He can mix the manuevers as he likes:

And so on. Interesting – though as you can easily guess, it’s not tested. Like D.C. in his post, I’m just mulling some ideas (in my case, old ideas with a little spur-of-the-moment embellishment). I’m not at all sold on my idea above.

First, is my Draw a Bead even useful? Typical examples yield pretty modest bonuses, at the expense of valuable combat time. Hmm, perhaps its built-in +4 skill bonus should be a +8?

Or, perhaps we should leave it at +4, but let Draw a Bead yield +1 TH per point of success. That can quickly create some big bonuses, true; if too big, we may want to rethink whether to allow TH bonus from Aim and Draw a Bead to stack (i.e., you can use both maneuvers, but get only the larger TH bonus from the two).

However, before you decide that a quick +2, +4, or better TH bonus from Draw a Bead is far too generous, consider this: large bonuses will only come with great rolls that would have hit the target anyway had they been actual shots. (It’s awesome to claim a +6 TH bonus on your next rifle shot thanks to a great Draw a Bead roll, but not as awesome as it would have been to have actually shot the zombie with that roll!)

Homing in on that point, though, I see further trouble: Using my numbers, does it even make sense to seek a Draw a Bead bonus greater than +4? That is, once you’ve secured a +4 TH bonus, you now have the choice of rolling Draw a Bead with its built-in +4 skill to try gaining more TH bonuses, or rolling TH at your current +4 bonus to actually nail the freaking terrorist! That’s not much of a choice at all. Similarly, if you’ve performed your full 3 seconds of Aim, why bother making a Draw a Bead roll at its +4 skill bonus so you can possibly gain yet more TH bonus, when you instead can make the actual monster-blasting shot at an almost-as-good +3 TH bonus?

Alas, without some boost, there’s little incentive to use my spiffy new maneuver.

I think I may have a good fix for my concerns. Let’s go back to the bullet-point rules above, and make one addition: Let the TH bonuses gained from Aim and Draw a Bead also feed back into Draw a Bead itself!

In other words, we make clear that the Draw a Bead roll is the current TH roll +4. That creates an interesting positive feedback loop. Until his TH gets so high that Jim is comfortable with his chances of hitting and finally takes the shot, he always has some incentive to keep trying to perfect his targeting using Draw a Bead. If he has the time, that is! (He also risks the loss of all his hard-won bonuses through a critical miss…)

How much did I miss by?

That’s a very wordy exercise in out-loud design musing; the rule can no doubt be rewritten succinctly, if made workable.

If, that is! What do you think, reader? What’s broken in the above, and how would you fix it?