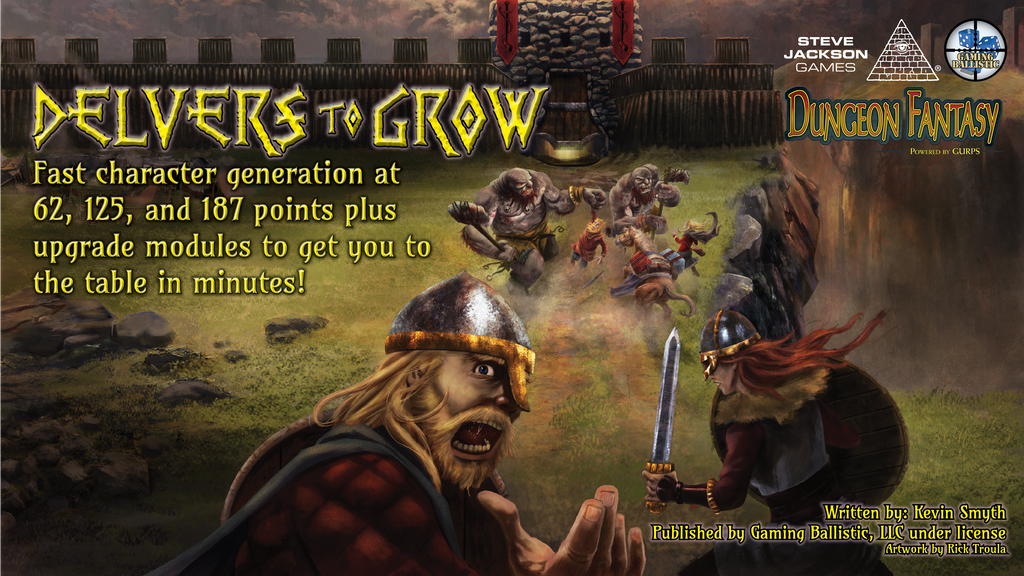 I’m late wth this post; the Big News in question is a Kickstarter campaign with 60 hours to go. But better late than an ogre punch upside the head (or something like that), as they say.

Dungeon Fantasy Roleplaying Game (DFRPG) is the best dungeon RPG out there, for a ton of reasons. Its competition in the market includes a lot of truly great games (including a really big name or few), but DFRPG out-dungeons and out-dragons them all. (Yeah, that’s an opinion. Got lots more where that came from.)

Characters in DFRPG are rich and detailed (like this guy!), and that’s a beautiful thing. Creating those unique personas can take time, though, especially as the game tempts new PCs with an impressive arsenal of choices for monster-slaying powers (none of that “fresh from the village farm” Level 1 stuff). DFRPG makes character creation as easy as can reasonably be with templates, worked-out pre-gens, and lots of advice, but the result isn’t quite to the level of “hey, dudes, let’s make new PCs and jump into this dungeon, like, now.“

Gaming Ballistic, creator of licensed products for DFRPG, is wrestling this shortcoming into submission with the upcoming Delvers to Grow. I was first aware of this project as a supplement for introducing lower-powered delvers to DFRPG (hence the “to grow” moniker). That’s something I was glad to hear, as a) I’ve always liked lower-powered PCs and the games they star in; b) lower-powered PCs are naturally quicker to build; and c) lower-powered PCs are easier to play, especially for new players. (On top of that, characters built on modest power levels are perfect as NPC hirelings, friends, and foes.)

A collection of ready-made low-powered characters, and advice on recalibrating DFRPG for PCs of that level, would on its own make Delvers to Grow a no-questions purchase for me. But the project has more to offer: it’s going all-in on making PC creation fast, through quick-pick packages of abilities. Snap the parts together, and boom, it’s a game persona, ready to go forth and conquer or die gloriously in the trying. (As I understand it, character construction is the same quick, friendly, LEGO-like procedure found in DFRPG‘s existing PC templates, but even easier. Chunkier. DUPLO.)

That’s my understanding, anyway. The Kickstarter is still on, so I’ve yet to see the end product. But advance word from testers is great: finished PCs, built on multiple available choices of power level, in just 15 minutes or less. Near-instant characters, ready to go from beginner or semi-beginner delvers to full-fledged 250-point DFRPG heroes and onward from there. (Don’t worry about getting dull or weak PCs; GURPS Dungeon Fantasy 15: Henchmen, an entry in the GURPS Dungeon Fantasy product line that’s the spiritual parent of DFRPG, made clear years ago that 125-point PCs and hench-things pack a lot of fun and potent abilities.)

So. Jump into DFRPG and Delvers to Grow, and get ready to send fresh PCs off to the dungeons while gamers in other systems are still figuring out that Path of Moon-Totem BloodWizard Sword-Dancer-Singer thing. Hie thee to the Kickstarter, pronto!

Note: The Kickstarter has funded, so if you join, you’re gold! But if plenty more people join, stretch goals will make your deal even sweeter. Spread the word!