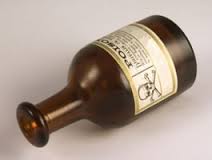 Here’s a really tiny idea of the type I try to relegate to Twitter, but I just couldn’t smush it into the character limit. So here it is, at languid non-abbreviated length.

Unusual Biochememistry (B160) is a nice disadvantage for alien or other exotic bodies. The effect is simple: standard drugs, if not tailored at high cost for your oddball chemistry, may have the expected effects, or no effect, or expected effects with added bad side effects. Those effects are simple to determine too: there’s just a little 1d6 table with those three outcomes (some imagination required).

There’s nothing wrong with that at all! But some imaginable outcomes won’t pop up, like the combination of zero expected effects plus crazy new side effects. So for a little more unpredictable fun, here’s a replacement that allows for more varied combinations of surprises (maybe even the rare good one!):

Harmful effects might be 1d fatigue, or -1 HT, or a -5- or -10-point disadvantage. Beneficial effects should be similarly modest, but could include a couple of Fatigue points, or unexpected Bravery (itself possibly dangerous…), or a small boost to sense rolls. All of these should be temporary, of course!

Finally, whatever the results of all rolls above, feel free to creatively add “0-point” details just to keep the players worried: a harmless rash, hair standing on end, a barrage of long-forgotten songs coming to mind…