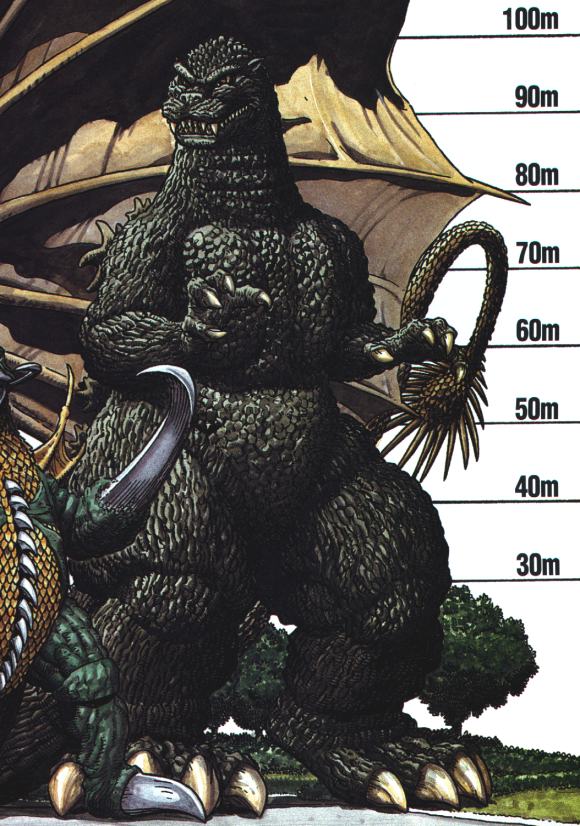 Well, sure, you knew that. But how much stronger?

I was browsing John Woodward’s nifty GURPS Godzilla page. His is no mere lazy stab at a handful of stats (like… well, this post is), but is a thorough guide to roleplaying the the Toho cinematic universe. Characters, monsters, history, plots, and more. A campaign in a box, if you will.

A tall drink of (heavy) water

How big a box? To hold the Big G, at least 300 feet high – that appears to be the canonical height of Godzilla, despite some variance throughout his storied career.

But those stats are for GURPS 3e, and some changes are in order. In particular, ST can likely be much less under 4e. Unfortunately, John says he doesn’t have time now for a 4e upgrade. So while we all look forward to that someday, I’ll ponder 4e statistics.

First, let me dust off that copy of GULLIVER Mini for 4e – oh, good, it’s not even dusty yet. Following the checklist there:

We need to start with an SM. if Godzilla is 100 yards tall, that gives him a height multiple (HM, using my own abbreviation) of 50, and places him at an even SM +10.

His starting stats, before considering size? Your guess is as good as mine; start with ST 10, and see what factors might change that. We’ll want high starting ST, what with G being all dinosaur-y and radioactive. GULLIVER Mini’s optional extras suggest +50% ST simply for a powerful build to help move a SM +10 creature’s mass. Now, in 4e, +50% is a lot of extra ST, and is a bonus going beyond some realistic extra bulk for size – but SM +10 is of course not realistic either. While Godzilla doesn’t quite have the Mr Universe musculature that a starting ST 15 suggests, we can assume that his mutated monster flesh adds power. I like a starting ST 15.

Starting HP? I dunno, how about the default ST level, or 15. Weight? Good guess. He definitely has a thicker build than a human (gawd, those legs!), and then there’s a huge tail, big back-plates, and thick armor. Let’s jump right to 250 lbs. for our human-height model.

Starting DR? No idea at all. I’ll pass for now.

Next, GULLIVER Mini’s optional extras suggest a hefty -3 on HT for the difficulty of making such a ridiculous size work. That makes sense for a realistic creature, so ignore it here! Still, I balk at any use of HT 20, and would probably go with HT 15 or so; that’s my personal image of what “ultra-tough” HT should be, even in a giant monster.

Similarly, those optional extras will suggest some serious slowness in agility stats (DX, Basic Speed, and Basic Speed reductions) for G’s incredible mass. Again, that makes sense for a realistic critter, and can be ignored here. See John’s stats in his guide, and modify however you like; any guess is as good as another, and even better if you can justify your estimates of these stats based on some movie scenes.

As I didn’t set a starting DR, I’ll have to make up a final one. We could keep the original 3000, but note that that was paired with ST 7500. If we wanted to keep DR down to about half ST, and also juggle it in relation to HP, something as low as DR 300 may make sense.

What’s the DR of plot armor?

This is where we get into a) big 3e vs 4e differences, and b) the bigger issue of game play, and how tough G should be vs human technology. You’ll note that we’ve racked up only 750 HP for G so far, vs the 50,000 John gave him. The latter was about 7 times Godzilla’s 3e ST; if you want to keep that ratio, boost his new 4e HP to about 5000.

But that’s still a huge difference from the 3e HP stat. Should 4e HP be 750, or 5000, or 50,000? And DR: Go for 300? 3000? Something in between? You’ll have to look at the big picture and decide. What sort of guns will the army be throwing at G, and should the best of military force be damaging to him at all? How much damage will a typical giant foe dish out, and what should the effect be on G? Tough questions for a tough lizard. I’d be very interested in hearing people’s thoughts, especially those conversant in the ways of GURPS high-tech military weapon capabilities.

Point cost for Godzilla? I’ll leave that to the interested; me, I stick to my rule of “if it’s not a PC, I couldn’t care less about point cost”. Just keep in mind that G gets the max -80% discount on his ST and HP. (If he asks for even more… gulp… just give it to him.)

Actually, stats themselves are more a curiosity than a necessity for G. The role of Godzilla in a game, like a Gandalf or a deity or any such, is “plot device”, and I typically don’t work out stats at all for such beings! But it can be an interesting exercise (and in this case, the ultimate test for those Mini rules).

How do you Godzilla?

The above is definitely not a thorough undertaking, brushing over many aspects of Godzilla’s stats. What would you add or change? Are there other big considerations for anyone taking G from GURPS 3e to 4e?