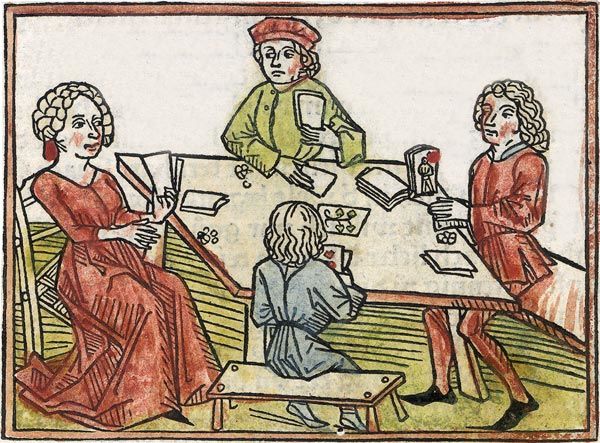 We interrupt this site’s regularly scheduled posts about weapon stat trivia and other simulationist drivel to bring you long-simmered higher-level thoughts on gaming itself.

The following likely offers nothing you haven’t thought yourself or heard before, but that’s okay. For the interested, here are a few things that I’ve always found particularly interesting about RPGs.

That’s a rarity. Think of the types of games you play at a table. Not specific games, but broad, top-level categories. There are card games, of course, in a zillion variations. Countless board games, too. To avoid getting too broad, we can consider strategy games like go and chess as having their own category, and also set aside wargames as a unique category. And I suppose we can round out categories with tile-based games like dominos, games of manual dexterity like Jenga, dice-only games, and games of chance like roulette. Maybe some parlor games could even be seen as table-top games.

And so on. We could spend an hour coming up with types of table-top games, and then spend the rest of the day arguing over how to group those into top-level categories. In the end, though, I posit that no matter how many specific table-top games there are, they can be sorted into a pretty modest number of categories. And while specific games themselves can be as new as today, their categories are all old. Card games, strategy games, gambling games, what have you—they all have forms reaching back centuries or millennia.

But then there are table-top roleplaying games. Sure, they share a lineage with wargames, and may contain elements of categories like board games and dicing games. (The pastime of storytelling, too, is obviously anything but new.) But I think few people would deny that RPGs blend those elements into an utterly distinct category of table-top game.

RPGs are also new (in the big picture of things), appearing in recognizable form just a few decades ago. I can’t off-hand think of any similar major category of game that’s new, other than video games (which of course had to wait for modern technology).

Maybe it’s a silly thought, but I find it kind of cool that the RPG, a top-level category of game that could have been invented at pretty much any stage in human history, only came about during or a bit before the lifetime of anyone reading this.

(The Monsters and Manuals blog offers the opinion that, had Gygax and crew not created D&D, RPGs in some form similar to what we know were an inevitability. I agree; “play-acting but with a resolution mechanism” is a pretty basic idea that people anywhere, anytime might hit upon. But for whatever reason, humanity left full-scale development of the idea up to the imaginations of some guys in 1970s Wisconsin.)

People normally listen to a story (or watch a movie, etc.), or tell a story (write a book, etc.). RPGs are a fascinating third way to enjoy stories: part listening, part telling, yet something else all the same.

I wrote about this already, so I’ll direct readers there: What is a roleplaying game?

Who you calling a “nerd”?

RPGs began life under the label of games for nerds. Gamers know what I’m talking about, so I won’t rehash the tale here. Nor will I protest and argue with that label. I get it; there’s just something about the early-days image of (mostly) guys packed around a kitchen table strewn with D&D (or whatever) books. And… not to stereotype, but many of those early-days players were, well, who they were. (Or are.) Not necessarily the chic clique at school.

But… How did the nerd-mockers always fail to recognize what a hugely social activity RPGs are? All multiplayer games are by definition social, sure, but some can be barely so. You can play a game of chess or go with lots of chin-stroking contemplation and close to zero talk. Plenty of chatter typically accompanies family-style board games, but it’s incidental to the game itself; you can, if you want, go through a marathon round of Monopoly saying little beyond “I’ll buy a hotel” and the like, only as needed.

An RPG, though… It’s nearly all social. Stating every action of your character, bantering with other players, hashing out plans, negotiating with NPCs, cursing out enemies, injecting personality into your persona—those things are the game!

I think much of the early “nerd” association came simply from games’ common fantasy and sci-fi motifs (“nerd genres!”), plus the fact that RPGs are, well, games (“Kids’ stuff! Kids and adult nerds!”). Fortunately, that perception has changed a lot in recent years as the hobby has gained acceptance (and even celebrity champions). Games themselves (table-top and video alike) are bigger, more popular entertainment that ever, and Star Wars, Marvel movies, and a host of other cinema blockbusters have spearheaded a huge mainstreaming of sci-fi and fantasy.

There’s a lot of great opinion and scholarship out there on the past and present of RPGs and their acceptance in society; I’m not a careful observer of this area, and am not one to paint a good picture of the present. But it goes without saying that there certainly was a heavy “nerd stuff!” association in the past.

I always found that interesting—as in, puzzling interesting. That is, when a group of people would go to a movie and spend two hours staring slack-jawed in silence at a screen, barely conscious of each other, that was considered a normal and healthily social thing to do. Whereas when those same people would set up an RPG and spent two hours laughing, acting, scheming, and shouting to jointly tell a story, that was called nerdy.

Something about that never made sense to me!

Sure, buying into a game system probably means a few dozen bucks these days, even hundreds of dollars when you start picking up lots of books and paraphernalia. You can blow a lot of cash on well-supported systems, and if you’re in the habit of collecting games for collecting’s sake, the sky’s the limit.

But if we set aside the joys of reading and collecting and instead talk about playing, the monetary cost per unit of play value can only be expressed as “dirt cheap”. You don’t need lots of supplements and gear to run a few RPG sessions or even a long-running campaign (you probably wouldn’t get around to cracking open many of those supplements at the table anyway). The basic set-up of a good RPG – probably a handful of books at most – will see you through a ridiculous number of hours of memorable fun, if you let it.

Compare that to other forms of storytelling entertainment. Novels and movie DVDs are great the first time around. Some works might hold up to multiple readings/viewings, but the fun likely diminishes every time. (I stopped buying DVDs long ago, upon realizing that I rarely watched anything more than once.) And games? Board/card/other conventional games can be classics that never get old, but many will become played out and collect dust.

RPGs, though? As long as you can keep supplying the real cost input (time and getting people together, not $$), they just go on forever, always ready to become something new. A $75 RPG played only 10 times is still offering fun at well under $10 per hours-long session—crazy cheap entertainment for a group of people. Make it a campaign with 100 sessions over a few years, and the distinction between the calculated per-hour cost and “free” is just one of pickiness.

(Some of us even go beyond play to squeeze another value out of RPGs: incessantly tinkering with the systems to dream up more rules adds and stuff. But that’s not so much “game value” as a questionable mental state.)

How can the games offer all that at such reasonable cost? It’s partly because creators are willing to make the games for so little. Any given game is likely much more passion project than profit project. Again, a buy-in of $25 or $50 or $100 may not feel cheap to the buyer, but that amount multiplied by a pretty darn small number of sales (for most games) leaves creators with very modest compensation for the work and time they put in.

And what do you find interesting?

Again, the above represent some pretty mundane thoughts about this hobby of ours, but I’ve been wanting to get those out of the Notes app and onto your screen. So there you go.

How about you? Any disagreements with something above? Or do you have other observations on things that amaze, amuse, or perplex you about RPGs?

Header image: Some proto-gamers in action!

(And one was a bard, and another a knight, and the GM an actual wizard, but it made no difference, the King’s Guard gave them all wedgies anyway.)