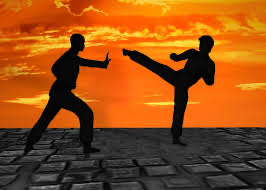 Interesting news bit: In preparation for the World Cup games, police in Japan have developed a gun that shoots a 25-m square net over fans who bring just a bit too much enthusiasm to the proceedings. Specifically, the police are worried that their standard method to rein in rowdiness — judo-based restraining moves — may prove difficult against hyped-up, beefy European hooligans. (Like the police, we’ll politely refrain from specifying British. Oops, just did.)

A comment from the World Cup security division, Sapporo HQ, Hokkaido Prefectural Police: “Of course, martial arts form an important part of our training, but if you take the size and power factor into consideration, (the restraining nets) could be more effective.”

So, what’s the gaming connection?

And two: The above is a nice little reality check against the misconception, perpetrated by common rules in games, that martial arts like judo can somehow make physical power irrelevant (or even a handicap). Fun in a cinematic game, but wrong in a realistic setting. As the above police know all too well, while judo can do a heck of a lot to lessen a power disadvantage, in the end power still battles power. See GULLIVER for GURPS 3e for unarmed combat rules that reflect this.