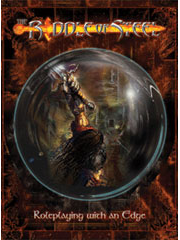 A friendly correspondent and I were recently discussing some finer points of my Edge Protection rules for armor in GURPS, which led to a tangent about combat rules in general under another system, The Riddle of Steel. Unfortunately, I’ve only looked at that system’s “Quickstart Rules” overview and glanced through its core rule book; I haven’t played it or read it in detail, though I’ve heard many good things about it, especially the realistic feel of its signature combat system.

My correspondent, Christian Rosenkjaer Andersen, was good enough to give me a sense of its flavor via a detailed description, which I thought readers in general might find interesting. With his permission, here’s one fan’s overview of TRoS:

Combat is based on using dice pools (d10s), equal to the value of your Weapon Proficiency and a derived stat called Reflex. I believe 14-15 dice is the max. for normal starting PCs.

Reflex stat is based on basic stats Agility and Wits. Note that Wits is how well and fast you react to things, mentally. There is also a Mental Aptitude stat for most other mental stuff.

Each Profieicncy then has a number of Maneuvers, each with an activation cost in dice, which might be 0. Faster weapons, like swords, have a lot of Maneuvers like Feint and Counter. While the heavier axes don’t, but instead rely more on Bind and Strike or Hook. There are Offensive and Defensive maneuvres, listed seperately. Counter is defensive, where you defend, and make a quick counterattack. Hook is offensive, where you try to trip or disarm the enemy. Each weapon then has an Attack Target Number (ATN) and Defense Target Number (DTN). These change whether you swing or thrust with the swords for ATN, or for DTN whether you’re gripping with one or two hands. Axes for instance have poor (high) DTN, that’s why you’d want to use a shield with them. But slightly better in a two handed grip. Poll axes have an ok DTN, because of the haft. And so on.

Once combat is imminent, both parties take a red and a white d10, and secretly select one, and revealed at the same time. Red means attack, white defence. White-white means both parties circle and anticipate, ready to defend. The procedure is repeated. Red-white is the “standard” where one attacks and the other defends. Red-red means both attack, none defend. Each Round consists of two exchanges, after which Combat Pool refreshes. Each exchange lets you choose one manoeuvre, but having thrown a red die means it must be offensive, or for a white die defensive. Using red-white as an example: The attacker calls his Offense, and how many dice he uses. Defender calls his defence, and how many dice. Both roll, checking to see how many dice are equal to of higher than the Target Number. If attacker wins, he hits, and his Margin of Success is added to damage. If defender wins, he is not hit *and initiative shifts to him*!!! On the next exchange, he may call an Offense, and the other guy must decide whether to defend or keep attacking. On a tie, defender is not hit, but attacker keeps his momentum.

Once you get hit, you suffer horribly for the damage. There are rules for blood loss (means losing Health points temporarily, meaning further bleeding is more likely, and at some point you go out cold), rules for being knocked down, knocked out or have the weapon knowcked from your hands. You also suffer Shock, which is the immediate effects, meaning some Combat Pool dice are immediately lost, for the next exchange (only). You also suffer Pain, which comes after shock, and is the lasting Dice loss, in all exchanges to come. You’ll quickly wear down an enemy, if you start nicking him, because the next attack will be worse, and so on.

The exact mechanics of the maneuvers is where things get tricky, and good. Because these are the tactical choices you make. I’ll note a few of the more fun ones (that I can remember). Lets assume 15 dice combat pool.

*Feint, normally only for lighter weapons, like swords. You call an attack as normal, at a location, and assign dice. Defender calls his defence. You may now “change your mind” and alter the normal attack to a feint, because you’re really attacking an adjacent location. I can’t remember if there is also a flat cost (like 3 dice?) for doing this, but each extra die added to attack, cost one die, so you throw one die away, for adding one. The best tactical way to use this is to call a weak attack (say 4 dice). Then the defender must choose either to call a just adequate defence (5 dice, DTN for shields is low), or to play it safe (8 dice). If he plays it safe, he’ll propably win the contest, and gain initiative, but then you’ll have saved most dice for the following exhange, so you should have little trouble winning initiative again, perhaps in a nasty way. But if defender just spends 5 dice, you suddenly turn the attack, and add 4 more dice, at the cost of one additional die each. Attacker now rolls 8 dice attack (but has spent 4 more paying for this, so a total of 12 of his 15, leaving 3). Naturally he should beat the defence, and do a nasty hit. And after a hit, the previous attacker retains his initiative. So even though the second exchange can only be a 3 dice attack, and the defender *had* 10 dice left, he’ll propably have lost quite a few to Shock. And even though me may defend succesfully, and get initiative for the next round, his refreshed Combat Pool will be at a loss from his Pain.

And don’t ever run out of combat pool, because then you’re defenceless!

I know there’s some Quick Start rules to be found on the net. I’ve never used them myself, but hear they’re too simplified and not very good. The basic rulebook is sadly very chaotic and incomplete, the expansion “Flower of Battle” adds and clarifies much. There is also a “Companion” book with the newest rules. I have all these, but haven’t read the Companion.

Hmm, looking at the publisher’s website, I too am not sure where one would find the Quick Start rules now; I downloaded them when they were readily available quite some time ago. (In fact, I’m not sure I have the right website; http://www.driftwoodpublishing.com/ has a decidedly semi-functional, ’90s appearance. Either way, I don’t see permission within the Quick Start rules to re-post the document, so I won’t.)

The above description whets my imagination to read and play the full game. It also leaves me with questions about what I’ll find. For example, there’s a Round consisting of exactly two exchanges: At first glance that has a very arbitrary sound, but perhaps it plays smoothly. Similarly, on the nitpicking strict realism front, I’m a little wary of quantities (like “dice pool” here, Handling in Car Wars, or many other examples in gamedom) that run out during a time period (like a Round) to be fully replenished at the next time period barrier, as opposed to being replenished by fighter action (like spending an action getting ready and composed again). And while we’re being picky, are distinctions among weapons’ abilities to perform actions like Feint and Counter smoothly sliding distinctions based on weapon characteristics, or are they binary properties (like “sword can Feint; axe cannot”)? Do wielder characteristics play a proper role – i.e., can a large, strong humanoid overcome the limitations of a bulky axe and wield in ways a human couldn’t? Or does the system, like many, inherently rely upon a certain range of human fighter types to generate best results?

I certainly won’t label such thoughts reservations; that would be grossly unfair to the system when I haven’t even read the core rules! Nor are they necessarily important questions; the game could sacrifice considerable realism in favor of playability on any or all of those points, yet still prove the most fun and realistic-feeling combat simulation I’ve ever played. The above are just points of curiosity. I look forward to exploring those and many more aspects of the game.

Readers, what are your opinions and experiences with TRoS? How does it fare against the detail- and option-rich combat stylings of GURPS 4e and Martial Arts?