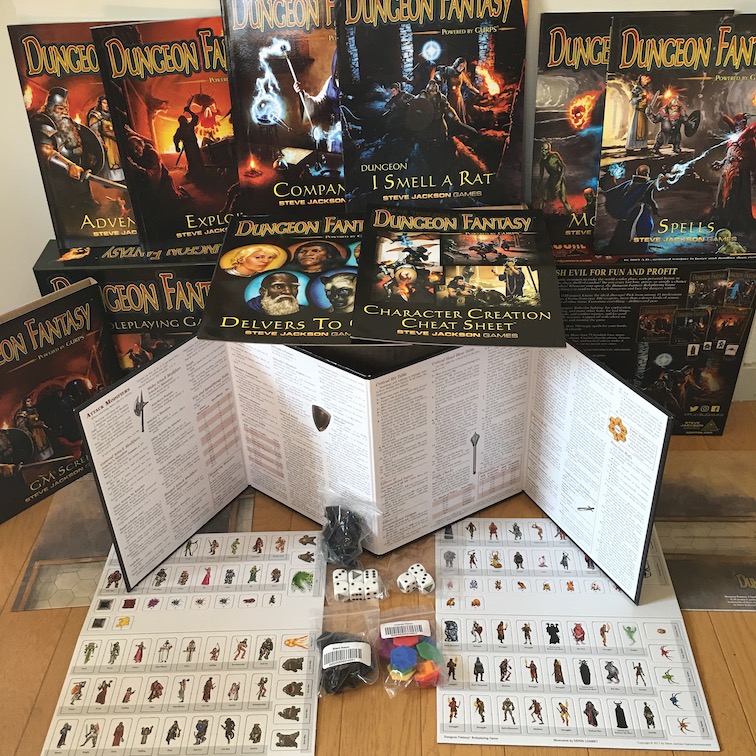 On to Part III of thoughts upon exploring Dungeon Fantasy Roleplaying Game, the latest “powered by GURPS” wonder from Steve Jackson Games.

Part I offered miscellaneous notes on the Adventurers book. Part II focused on Adventurers‘ catalog of skills. Here in Part III, I look briefly at the remaining four books found in the game box.

Unless I’m missing it, DFRPG doesn’t offer Optional Rule: Extra Effort in Combat from GURPS (BS p. 357). That’s a bit too bad, as the rule is useful for letting fighter-types burn off FP for nifty minor combat boosts, which in turn means more tactical options and more resource management fun. Well, like a lot of rules bits, it’s an easy thing to fold back in if a GM likes. (That’s the really nice thing about this whole “powered by GURPS” concept: there’s a fully realized game system lurking beneath DFRPG, ready to fill any gaps a GM could want.)

I’m glad that “combat toolkit” options like Deceptive Attack and Rapid Strike are included in DFRPG; they’re one of the first things I checked for when I picked up Exploits. A key appeal of GURPS is that combat isn’t just about using skill to whack away at foes’ hit points; rather, the game encourages fighters to do something with their skill—go for vital targets, overcome defenses, strike multiple times, etc. It’s good to see DFRPG carry this over…

… with a small exception. One of my favorite combat toolkit options has gone AWOL: Telegraphic Attack, a great, simple tool for finessing a lot of unique combat situations. Telegraphic Attack is particularly useful for backstabbing – and, hey, maybe it does exist in the DFRPG rules for that action: “The sneak’s first attack roll on that foe is at +4 because it’s perfectly set up”. That’s surely a veiled invoking of Telegraphic Attack. Good!

Even if DFRPG does quietly build Telegraphic Attack into one of its most common uses, though, I’d rather see it made an explicit option like Deceptive Attack and Rapid Strike. Players would find it useful in many situations. So would GMs. For example, I heartily recommend that GMs make Telegraphic Attack the favored fighting option of roaring, clumsy brute-monsters. Without that +4 bonus, low-DX monsters end up just swiping at air (boring!). When monsters do take the bonus, PCs will have to jump for their lives (exciting!), but will likely succeed at that defense (again exciting, and whew!). Which is how tense fights against big brutes typically play out in fiction.

Oh well. Once again, returning this missing bit to the DFRPG toolbox is an easy house rule for GMs.

On to another topic: Traps. Among the sample traps detailed on p. 71, I like the inclusion of the humble trip-rope. Sure, it feels a little out of place among crushing ceilings and evil runes, but it’s the sort of trap the PCs are likely to set! (And in the bigger picture, I like that DFRPG often zooms in on little details like this.)

A discussion of the Spells book is most likely to focus on the spells that didn’t make the transition to DFRPG from GURPS Magic and other books. No need to re-hash the topic here; anyone interested will find a full online discussion here.

Both Adventurers and Spells note penalties on druidic spells where Nature’s strength is low, but Spells also notes contrasting bonuses for pristine forests and the like. The DF series doesn’t offer this bonus to druids (unless I’m missing it), but I’m really glad to see DFRPG introduce it. Druids almost always face spell penalties for the usual game settings of dungeons and towns, without opportunity for the occasional high-power spots that wizards and clerics enjoy (High Mana and High Sanctity, respectively). I had actually been thinking that it’s only fair to give DF druids some similar bonus for “deep” nature. DFRPG beat me to it.

A related thought: While DFRPG suggests primeval nature, untouched by humanoids, as high-power spots that grant druids bonuses, I’d also suggest the occasional high-power spot that isn’t untrod wilderness, but is consecrated all the same (perhaps representing harmonious co-existence between humanoid-kind and nature). You know: Stonehenge, and places like that. High-ranking druids should be able to imbue a natural spot, whether primeval or not, with high Nature’s Strength through lots of Religious Ritual (Druidic), perhaps backed by appropriate spell castings and sacrifices. (And circles of big rocks. You want those too, apparently.)

Repeating what I said about professional templates in Adventurers, I’d like to see color used in monster write-ups, too. That’d make stat blocks easier to read. Even more, I’d like to see the entry headers (i.e., monster names) rendered in color. Or just made bigger. Or both. As it is, the headers don’t stand out as much as I’d like.

Dragons are in the Monsters book, and that’s great. I think they’re low on ST and HP for their size, though. (I know, they’re dangerous enough as they are, but still…)

I think that the Monster Prefixes section from DF‘s Monsters 1 book would have been a really nice inclusion in Monsters. Oh well. Surely there will be another DFRPG Monsters book in the future that could add this.

I like the category organization used for some monsters, such as placing a number of creatures under “Goblin-Kin”. Maybe this should be extended, though. For example, how about placing all those oozes, jellies, puddings, slimes, and molds under the single category “Goo”? Similarly, would it make sense to group demons under one umbrella? Or put all mundane animals into a category?

As it is, the random-seeming use of grouping can make a few things hard to find. There’s Horde Zombie with its own listing on the Contents page, and then there’s regular Zombie too, listed separately toward the end of the page… but Orc? Or Hobgoblin? These aren’t listed on the Contents page. You need to remember to look up Goblin-kin if you want to find these. It’s a bit of a head-scratcher to me.

Here’s a thing you won’t find in Monsters—which, if you’re coming from other games, you may see as a big blank spot. The book’s monsters come with no easy-read indicator of power level. There’s no Challenge Rating, no level or hit dice number, not even the point cost total you’d find on monsters in some GURPS books. Is a riled ice wyrm a worthy foe for a PC party, or will it take two or three wyrms to challenge the group? GMs will just have to eyeball beasts and abilities, and use judgment—something newcomer GMs won’t find easy.

Although Monsters’ discussions of gaming foes doesn’t address “challenge level” head-on, Exploits does under Balancing Encounters (p. 85). That section offers good, gritty tips on matching monster mettle to PC prowess, and even includes a a three-way classification of monster power into fodder, worthy, and boss. So that’s something—though, again, GMs are on their own in deciding which of these power categories a given nasty falls under.

I understand that this “problem” is unavoidable. An ice wyrm looks like a “one-is-plenty” boss monster, but whether it’s really a proper challenge—or too much of one—is hugely dependent on the PCs’ capabilities, their power level, and, of course, their number, as well as the environment and timing of the encounter, the players’ game experience, and how “smart” the GM plays the beast. In all but the simplest game systems, power rating comparisons are necessarily of sketchy usefulness. Taking Exploits’ helpful advice on encounter balance to heart, and learning harder lessons about balance through experience, may be the best that a DFRPG GM can do.

Dungeon: I Smell A Rat

I’ll pass on lots of commentary until I play this vermin-infested adventure. There’s already plenty of discussion online, especially regarding the decision to openly mark the play maps with areas of interest. (Like many other buyers, I have to wonder why DFRPG doesn’t mark the areas only on the GM’s maps in the adventure book itself, and leave the actual play maps clean of these obvious clues.)

One thing I like about the Dungeon book: it goes out of its way to give GMs more than just the adventure itself. Advice: Running Combats on p. 8 is a very short, very nice overview on handling combat and playing monsters well, and is a good complement to the above-noted Balancing Encounters section in Exploits. A lot of experienced GMs would do well to read this a time or two.

As a final comment on the book, I’ll just note that “Merle” is not a name I expected to see in a medieval fantasy adventure. Well, I guess surprising the players is part of the game. So Merle it is.

That covers the core five books of DFRPG (and the play maps), but there’s still more for me to babble about. Stick around for Part IV.