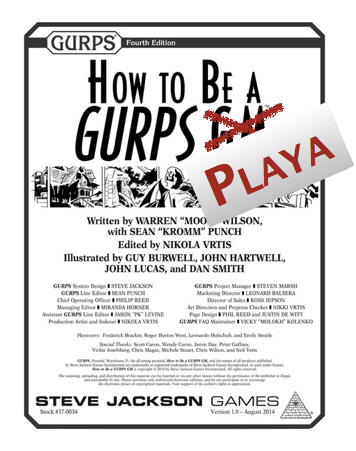 The first time I suggested “There oughta be a book” was here, with a suggestion for more mini-books on Yrth cultures and societies (because, hey, I like Banestorm).

Time for another suggestion!

How to Be a GURPS GM by Warren “Mook” Wilson is a great book. It’s packed with invaluable advice and insights for gamemastering GURPS.

Well, with the Dungeon Fantasy Roleplaying Game set to ignite (?) an explosion (??) of demand (???) for our favorite game system, perhaps it’s time to release a dedicated guide to playing GURPS. A book that would fill three roles:

In short: Let’s have How to Be a GURPS Player! (Sounds like a fine new idea to me, though for all I know this is a name and topic that’s been proposed and heavily discussed elsewhere already. Humor me anyway…)

I haven’t properly pondered what this book would contain, but scattered ideas jump right to mind. Here they are in sloppy stream-of-consciousness format, for your amusement.

Start the book with a note:

“This book is not necessary to play GURPS. Rather, it’s to help players get the most out of their time by (etc. etc.)…”

(Because without that disclaimer, you know what they’re going to be saying online: “OMG GURPS IS SO HARD THEY HAD TO MAKE A SPECIAL BOOK JUST SO YOU CAN PLAY!” Sigh.)

Nobody would want the new book to be a full rehash of How to Be a GURPS GM, but some parts of that book are great for both GMs and players. Noteable parts worth nicking, especially from its first 16 pages, include:

The book might include the following. (Much of what players need to know to understand GURPS is already in Basic Set; How to Be a GURPS Player can help just by pointing new players to the key sections in Basic Set they should read.)

A lot of this will be aimed at players coming from other game systems:

All about character creation

This would obviously be a cornerstone of the book.

Getting along at the table

I’m going to stop myself here, or I’ll be jotting ideas all day. There’s so much good stuff that could go in there. Going back to How to Be a GURPS GM, the “Relying on defaults” block on pp. 21-22 is an example of must-read material for players. Then there’s a whole world of fan material that suggests more content, like this random-ish selection of offerings just on combat topics:

And hey, here’s a player-friendly introduction to understanding the importance of modifiers on success rolls: Gaming Tips: Taking Your Chances on 3D6.

I see How to Be a GURPS Player as a how-to book with a pinch of sales pitch to prospective players (including a dash of misconception-squashing). A book that’s not just how to play GURPS, but also why!

Write the book, then skim it for the most important information. The stuff that shouts, “Okay, GURPS players – even if you don’t read How to Be a GURPS Player, at least read this.”

Boil that down to a tiny read. (Four pages? One page?) The result: How to Be a GURPS Player: Lite.

Place that online, free, as a dead-simple introduction for new GURPS players (and sales pitch for the curious). Something a GM can freely hand out with the message “Take five minutes to read this and you’ll be ready to join in.”

That boxed set may include everything the newcomers need to ease into the system. But for the players that want to move up to full-blown GURPS, or those that want to start out the hobby in your long-running campaign, wouldn’t it be nice to offer How to Be a GURPS Player as a welcome?

Well, readers! Do you think this book would be interesting? Do you think it might raise GURPS‘ appeal to outsiders? What would you add to it?