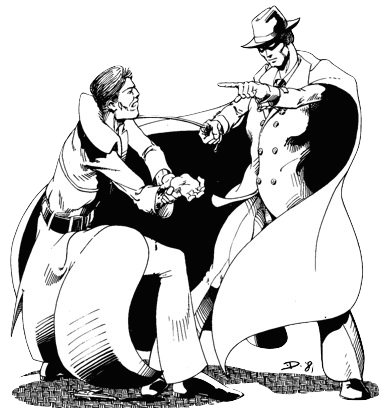 Jeff Dee, RPG author and awesome gaming artist (T Bone makes Will roll, squelches further fan gushing), is also a host of The Non Prophets podcast (together with none other than fellow gaming art god Denis Loubet!) and a past semi-regular host of The Atheist Experience broadcast and podcast. Episode #616 of the latter (embedded below), titled nothing less than “The Argument from Game Design”, let Jeff put his game-design cred to work in discussing certain arcane religious arguments that compare existence to “a game”. Straying a bit from that purely religious discussion, he also made some comments of broader relevance to gaming itself, including thoughts on what makes for a good game. The following bit caused me to raise an eyebrow:

… As a self-published role-playing game designer, one of my biggest pet peeves is that game rules are not protected by law… There are two mechanisms in place that you can turn to [in the US] for legal protection if you’re a game designer. One is copyright. The actual text of your rules, you can have a copyright on that… The other thing you can turn to is patent. If you have pieces you move around, you can patent what those pieces are and the way you use them. You can do those two things. Buy you can, in fact, legally take, say, Dungeons and Dragons – and people have done this – and completely reword it…

Jeff goes on to mention how people have done this with older editions of D&D, offering them with no consent by the games’ rights holders, simply by rewording the books’ text. (He also mentions that newer editions have more cleverly built in some degree of legal protection against this, though unfortunately he leaves out detail.) But for the rules themselves – sorry, in general there are no copyrights or patents available.

I guess that should all be of little surprise; after all, who’s heard of patented dice mechanics, or legal cases involving RPG rules copying? Still, the legal rights of game rule creators is something all of us home-brew designers (or would-be designers) should have a passing familiarity with.

No copyright on game rules? That means, first of all, that we can nab any rules from any game we want! Just grab ’em and plug ’em into our own works! Woo-hoo! Except: That’s so distasteful, or should be to the designer with at least Quirk-level Code of Honor. Yet… How can you not steal other games’ rules? Checks made using dice plus mods… Character attributes like Strength and Dexterity… Experience points… Levels… Point-build systems… We’re all taking core ideas from our progenitors, whether from D&D or other early games that borrowed from it. There’s no way to avoid that, and where such basics are concerned, it’s hard to even fault such borrowing.

And it works both ways. You or I could come up with the spiffiest way of simulating fluid combat pacing or of wringing all sorts of flavorful results from a single dice throw, and the next designer to come along, whether armchair amateur or big-name pro, could snatch up that idea with nary even a muttered “thanks” in Klingon.

There are probably volumes written by industry pros on the rights of game designers with respect to their rules work. I’m new to the topic and have nothing smart to say, so will say little. All that comes to mind so far is the following couple of prescriptions for the dilettante designer, which, of course, you should treat as utterly uninformed opinion of zero legal value:

One, we probably shouldn’t obsess over forging utterly unique game mechanics simply out of fear that we’ll copy somebody. There’s something to the idea that the good, basic things you’d want in a game have already been mostly invented. With hundreds of commercial and free RPG systems out there, even any “brand-new” rules you dream up will likely bear a mighty close resemblance to rules in some game you (and maybe nearly everyone) have never heard of. I for one would certainly want to avoid wholesale copying of signature rules that distinguish unique game designs, but being wholly original with respect to rules is neither legally necessary nor likely possible. Perhaps the best we can do is try to innovate where innovation is possible, adapt instead of copy existing rules where innovation is not possible, and always credit and respect the sources and inspirations for our rules.

Two, we should get used to the idea that our own rules innovations gain no special legal protection! This may be hard advice for the dilettante designer, but if you’re hunched protectively over some rules design out of fear of its being nabbed… well, once you do release your long-fermented RPG masterpiece, those tricks are up for grabs anyway. Better to just not worry about it, and distinguish your creation not by crunchy bits that no one else has, but by an integration of innovative and tested rules, along with great text and cool design and all that stuff, mixed into a whole that stands out.

Just waxing thoughtful here. (Rare, that.) Well, let me leave a different thought for those armchair designers who do get beyond the long-lingering project stage and onto a finished product. Via Slashdot, I spotted this series (Parts 1, 2, 3, 4) on “GenCon For The Aspiring Professional”. Taking a project to the biggest game convention out there, in search of a professional launch? Now there’s something for the home-brew builder to aspire to!