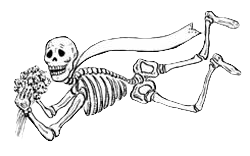 A correspondent is building a Size +1 flying giant skeleton, and has questions about its aerodynamics. (And people say we gamers are geeks! Ha!)

The discussion refers to rules in GULLIVER (for 3e) for figuring aerodynamics of creatures, for purpose of falling speed and what not. My reply to the question is below, just for the esotericness of it all:

Basic body structure is just humanoid… What’s missing? Surface area for tv or ftv, right? It’s a humanoid shape, but the aerodynamics would have to be different.

Good question. Let’s think this through…

Ignore density for a second, and use a human-sized (13-lb) skeleton. So it’s a humanoid shape, with so much stuff removed, and so many “holes” and open spaces, that it only weighs 7.2 lbs (13 lbs skeleton / 1.8 density).

With all that open space, there’s a lot less to catch the wind. Surface area has to be less than human.

But not as low as the surface area for a little, 7-lb human (about 2 feet tall?). Compared with a compact 7-lb human, the skeleton is spreading its mass over much more area — all those long bones, that wide pelvis, big skull, etc. Lots more to catch the wind.

You’ll have to take a wild guess and pick one. I might go with x1/3 (for no other reason than I’d pick a certain lottery number).

Makes sense to me. It has a lot of surface area relative to its very low mass; it’s very unaerodynamic.