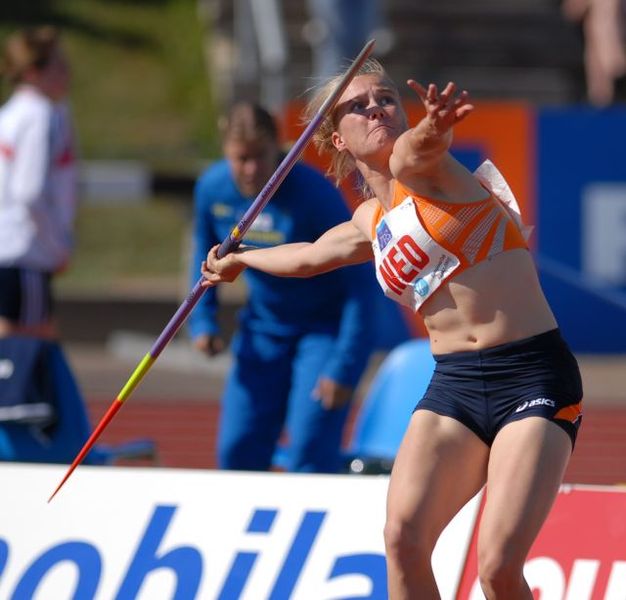 GURPS‘ thrown weapon stats neatly spell out the best distance (Maximum Range) you can achieve with a toss. These are multiples of Strength, typically STx1.5 for heavier weapons (spear), STx1 for very light ones (dagger), and STx2.5 for middle-weight weapons that hit a sweet spot for distance (throwing axe).

Working from those stats, Conrad the Bavarian and his ST 16 can hurl a javelin 16 x 2.5 = 40 yards. In battlemap terms, that’s right off the dining room tabletop; it’s a throw that should send even the hardiest of orc miniatures fleeing to a safer distance. With some Extra Effort, Conrad could hit 45 or even 50 yards.

And yet, our human arbalest may be chagrined to compare his toss against modern track and field achievements. Übermensch Uwe Hohn hit 104.8 meters, or over 114 yards, in 1984 – a distance so great that the track and field world had to modify the javelin to fly less far or risk running out of stadium! The current men’s world record holder under the revised rules, Jan Železný, chucked a javelin over 98 meters (well over 100 yards!) in 1996; on the women’s side, Barbora Špotáková beat 72 meters in 2008.

There’s no need for a game to worry itself with accurately simulating sport throws like these. But as Conrad laments, aren’t the rules holding something back from battlemap hurlers?

One problem: True javelin throwers gain throwing speed by running. Conrad can run and hurl, of course, but the rules grant him not a yard more for doing so.

Another problem, less immediately obvious: Using a normal Attack, Conrad throws and then returns instantly to a defensive combat stance, ready to dodge knives and arrows. That sounds fine for close-in fighting, but it’s all wrong for athletes in genteel competitions, or even battlefield spear-throwers safely out of reprisal range. Distance hurlers clearly go all-out – but when Conrad throws using All-Out Attack, again, the rules give him no extra distance.

Conrad needs to run up, forget defensive caution, and throw like he means it. This rules bit doesn’t overhaul throwing rules or recreate sporting records. It merely hands fighters (or athletes!) in the game a couple of options they’re missing to go the distance.

That’s the rule. Now grab your spear and show those jeering orcs that “safely out of range” actually isn’t.

A key point: Neither of these options makes any change to standard “I throw my spear” attacks. A GM can keep them quietly in the background until a player asks, “Can’t I get more distance by running, or throwing All-Out?”

Throwers can freely mix Extra Effort and the above two options. Apply in logical order: first boost ST for Extra Effort, then increase Ranges by the percentage bonus for All-Out Attack (Strong), and finally add the flat bonus for movement.

If you have GURPS Martial Arts, let throwers use Committed Attack (Strong) and Defensive Attack (see MA pp 99-100). Treat the maneuvers as written, with the following additions:

If it makes eyeballing easier, add one-third to Ranges for All-Out Attack (Strong), and cut Ranges to two-thirds for Defensive Attack. This replaces percentages.

Other than those, GURPS offers no distance bonus for skill. That’s arguably odd; technique is a big factor in achieving maximum distance with any object.

For a simple solution using existing rules, take the bonus from the Throwing skill and apply it to all thrown weapon skills. For example, Thrown Weapon (Axe/Mace) grants the same bonus as the broader Throwing skill, but only with the relevant weapons. (Remember, this increases ST-based distance but not ST-based damage.) It’s a bit of a change, but it’s realistic and fun for axe-flingers.

This is a simple idea that many GMs might like. I’ve placed it here under optional extra rules, though, and not under “The rule” above, as using it makes automatic changes to many characters’ throwing performance stats.

Bow and Crossbow weapons, however, rely on their own inherent ST, not the user’s technique, for distance. The Net skill, meanwhile, already has its own means of adjusting range for skill. Don’t apply the above skill-based bonus to these skills’ weapons.

GULLIVER and GULLIVER LITE present a complete reworking of throwing in GURPS 3e to accommodate any weapon or object with any type of throw, even recreating sporting results in fair detail. A key feature of the rules is skill-based distance bonuses for all thrown weapon skills, and even greater distance bonuses for specialized sport throwing skills.

It’s all beyond the scope of this article (and the interest of many players); see those resources and Sports throwing skills in COSH if you’d like to tinker. But below are a few extracted notes.

Other tweaks for sports throwing skills

There you go. Mix and match the above, and you should be able to recreate any sort of sport or other specialized throwing skill.

Extra distance with a throw can only come from extra speed. That, in turn, means that extra distance from any source should also mean more damage.

You can tinker with that idea if you like. But for simplicity, and to avoid messing up game balance between throws and melee attacks (which normally gain no damage bonuses from skill or movement), this article’s rules assume that only Extra Effort, All-Out Attack (Strong), Committed Attack (Strong), and the Throwing Art skill boost damage (per their respective GURPS rules), while movement and other factors boost only distance.

This article doesn’t attempt to recreate actual sport results, or even real battlefield throws that may have been measured and recorded. But with more options to play with, characters can at least try to approach record hurls. To go for the gold, make sure to take advantage of these:

Let’s put an example to work:

Eager to try out those new options, Conrad makes another running heave with a javelin. Say he boosts his ST 16 by 15% through Extra Effort, achieving ST 18. He starts with a reasonable 18 x 2.5 = 45 yards. There’s no one swinging axes at Conrad today (it’s a weekend), so he throws defensive caution to the wind and uses All-Out Attack (Strong) for a 30% distance bonus, achieving 58.5 yards. Finally, his full Move of 7 (twice the half Move he ran) adds to Maximum Range, for a net 65.5 yards.

Let’s calculate once more, this time letting Conrad use the skill bonus option. Our Bavarian has no special sport skill, but we’ll say his Thrown Weapon (Spear) skill is good for a 20% distance bonus. That and his All-Out Attack bonus combine to a 50% bonus, boosting distance from the starting 45 yards above to 67.5 yards. Add 7 yards for movement to get a final 74.5 yards.

There. 74 yards and change is much better than Conrad’s by-the-book 40 yards. It’s no record, but it’s not embarrassing, either!

If you really want to experiment with athletic records, work with all the factors listed above. To build an Olympic hurler, combine good ST (probably not as high as Conrad’s, but perhaps with extra arm ST or Striking ST), plenty of Will (and good coaching) for optimal Extra Effort, a very high level in a distance-maximizing sport throwing skill, and high Move.

Although the core rule offered here is short and simple, there are plenty of options and side ideas to consider. A simulation-friendly game like GURPS makes throwing an unusually rich topic!

So. Does any of this go the distance in your games, or should it all be given the heave-ho?