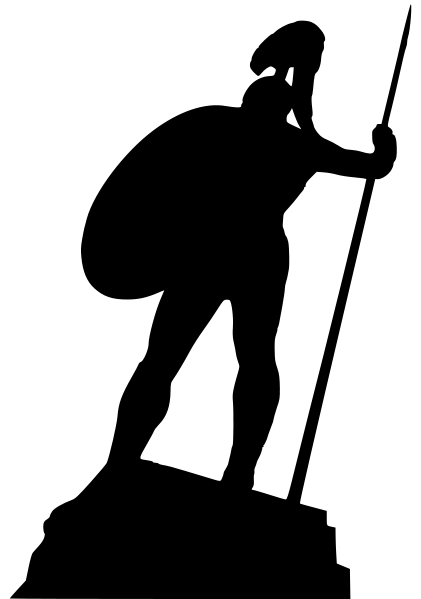 Intro: “Is that a Frisbee?”

“Sir! We demand that you halt this tea party right now, and give us back our shields!”

“Er, begging your pardon, brave Knights of the Shire, but we haven’t seen any shields . . .”

Hmm, just how big is a Halfling’s shield? And what happens if the little chap picks up a human’s shield?

GURPS Dungeon Fantasy 3 p. 8 offers some nice rules for Pixie weapons and other “tiny tools” – not generic, physics-friendly stuff, but quick’n’dirty guidelines for easy play. While shields got left out of that discussion, handling them in the same quick’n’dirty fashion is pretty easy.

How much protection does a shield of a given SM offer its wielder? That would obviously depend on how effectively it covers its user – i.e., the shield’s size relative to the wielder’s size.

A large user can bring a shield’s effective DB all the way down to 0, making it too small to guard anything!

Example: A human small shield (DB 1) repurposed for a SM -2 Halfling covers much of the little fellow, and offers DB 3. A shield of that size in the mitt of a SM 1 or larger Giant, however, would cover nearly nothing, becoming DB 0.

Normal usage assumes that the shield’s straps/grips are sized for the wielder. If the above Halfling or Giant were to pick up an actual human’s shield, apply skill penalties such as -2 skill per SM above/below intended SM, or disallow use, for poor fit.

In particular, using a shield with arm straps sized for a smaller SM might require that you hold it in the hand as a buckler instead.

If wielder size brings a shield’s DB to exactly 0, assume the wielder can still use it to Block using Shield skill, though with no bonus to any Active Defense, or other meaningful coverage, from DB.

If the wielder is so much larger than the shield that DB would effectively be negative, DB is still 0 (the same as having no shield at all) – but treat that negative number as a penalty on Shield skill, and disallow a shield bash or rush. While the object can be used for clumsy “blocking”, it’s too small for any other use as a proper shield.

Example: Imagine a shield smaller than small – not a still-sensible DB 1, but a wee DB 0! It’ll provide only DB 0 to a human or DB -2 to a SM +2 Giant. Either could use the tiny shield in a pinch, but not so well. While both can make Block defenses, the human gets no defense bonus for DB, and the Giant actually takes a -2 on Shield skill (which means -1 to Block), all in addition to any GM-imposed penalties for wrong-sized grip! Finally, the Giant can’t use the shield to bash or rush.

It’s best to refit this shield with an appropriately small grip and hand it to a SM -2 halfling. For this strapping (all of 3’8″!) lad of the Shire, DB 0 minus SM -2 yields a reassuring DB 2.

A DB 3 shield is already clumsy: wielders take -2 TH on melee attacks (B547, under “Attacker’s Situation”) unless they have special training (Shield-Wall Training, Martial Arts p. 51).

Shields can get even bigger! Suggested effects:

A DB 4 shield applies a -2 on all combat skills (not just melee TH), which applies -1 to Parry and Block as well. Also apply -2 to Vision rolls and -1 to Dodge. Let Shield-Wall Training reduce the combat skill and Vision penalties to -1.

A DB 5 or larger shield is effectively a pavise or even a wall-like mantlet (Low-Tech p. 116) and can’t be used actively. It allows no Active Defense, blocks vision, and would seriously hamper any other actions (GM call). It’s perfect, though, as full cover.

In addition to wielder size, wielder position would logically modify effective coverage and protection of a shield.

Let kneeling, sitting, or lying down behind a shield add 1 to DB (by effectively making you one SM smaller for coverage purposes). That’s a welcome defensive boost, but don’t forget that a shield of effective DB 3 or more carries drawbacks.

Let crouching behind a shield add 1 to DB if you wish; you can take the extra protection, or forego it to avoid the above drawbacks of a large shield.

Let fully “hunkering down” behind a shield – squatting or kneeling with head down, making yourself as small as possible – add 2 to DB. This also makes you immobile: no movement, attacks, or Active Defense! But this position lets a DB 3 large shield act as DB 5 full cover, making it a great choice for blocking dragon fire or creating an arrow-defying “turtle” formation.

Note that any drawbacks from a too-large shield are in addition to normal penalties from kneeling, crouching, etc.!

A shield would have a SM like any other object. It’s not vital to know this, but it’s meaningful should an attack deliberately target your shield.

Using the sensible (in my opinion!) rules outlined in GUTHS, melee TH is determined by the difference in attacker SM and target SM. So a SM +1 Ogress targeting a human’s small shield (DB 1, and thus SM -3) takes a -4 TH, for striking a target 4 SM levels smaller than herself.

Finally, note that you can easily figure a shield’s effective DB from its SM and wielder SM:

Shields in 3e have a PD score, not a DB score. Use the above rules with PD instead of DB, with the difference that PD is one higher than DB for a given shield. This calls for some simple adjustments:

This rule works especially well with rules for Shields and Cover. The ability to fully hide behind a large shield is something missing from current rules, yet is an important reason for lugging the big things around!

There’s really not much to this page, beyond the intuitive suggestion to modify shield DB for wielder size. It’s something any GM can easily drop into any game featuring odd-sized fighters.

Modifying shield DB for wielder position, on the other hand, is fun stuff even when everyone on the battlemap is a bland SM 0. It’s just what you need for shield formations, protection against hails of arrows, etc., and gives fighters incentive to take positions other than just standing.

This page separates shield size rules from an earlier page combining them with the rules for full cover. Both of those, in turn, come from old GULLIVER rules for Size and Shields.

I haven’t seen any problems with these rules in play, but if you do, say something!

There’s still something needed for these rules: stats (weight, cost, HP, etc.) for DB 4 and larger shields to protect the Giants out there. GURPS 4e still lacks a generic system for building such things, so we’ll have to extrapolate from existing sizes. Any takers?

A tiny PC shouldn’t have to lug around a heavy human shield. With these rules, you can arm your Halfling warriors with some nice lightweight shields that still offer them proper coverage. Look how happy they are now, banging their little swords on their wee bucklers! (But be careful: Jokes about teacup saucers and steak knives are just going to get you poked in the kneecap.)