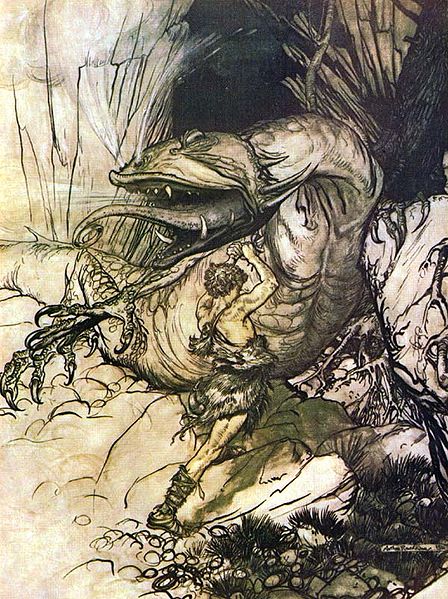 A fierce dragon finally meets its match: Conrad the Bavarian, who takes the dragon down from 120 to 0 HP and goes to administer final rites. Good job, but one question: how long will it take to deliver another 120 points to kill the unconscious wyrm? Or 240 points if the beast makes its HT roll? Up to 600 more points if those HT rolls keep succeeding? (Dragon HT can be pretty high!) Won’t the magic-user, the thief, and the cleric have nabbed all the gold pieces by the time Conrad finishes hacking away?

Well, if your character managed to chalk up 120 points of damage against a spitting, smoking terror, working another few hundred points against a barely-breathing lump shouldn’t be that hard. There’s always the “instant death” rule (B423), but even if you decide to play out the gore, things should be quick. Conrad can place his sword point-down on the fallen beast’s head and make like he’s digging. That could be gamed as maximum damage, which seems fair for a carefully aimed hit against an unresisting target. Add damage for an All-Out Attack, plus some for Conrad being able to put his weight into it. The brain hit allows a x4 damage multiplier. Once the sword gets past the skull’s DR, the GM can allow additional “attacks” that ignore DR, as Conrad twists and shoves that sword… It’s not pretty to play, which is why there’s an “instant death” rule, but however you handle it, finishing the dragon definitely won’t take all day.

Still, the sight of big, dumb monsters falling into unconscious slumber just like the heroes do, instead of up and dying like good monsters should, just isn’t kosher sometimes. Monsters should rage and slaver on until the point of death, and then keel over bloodily for good, right? How to game this (other than by GM fiat)? Below are two versions of a rule, plus a third that combines the first two with nice effect:

Let non-PC monsters fight long after HP 0, like a berserker. For every point of racial IQ under 10, add +1 to HT rolls to avoid unconsciousness from wounds. (Unlike Berserk, this doesn’t aid rolls vs death.) Assume a successful roll lets the monster stay conscious for as long as dramatic license requires; if the PCs want to force another KO roll, they’ll have to inflict fresh, significant (HP/10 or more) damage, not hide in a cave counting down the seconds until the monster misses a consciousness roll.

The drawback to this rule: it makes monsters stronger!

Ignore the standard -1 penalty on the KO roll per full multiple of -HP damage, for creatures using this rule. They maintain their full roll vs KO even as HP dip further below 0 – but that’s a small consolation as the death rolls, and the 5 x -HP automatic death mark, approach quickly.

The explanation? Game effect, plain and simple. Well, you could mumble something about simpler nervous systems and the ability to support the unconscious state… but more importantly, it works.

The drawback to this rule: it makes monsters weaker!

Give monsters both the above: bonuses to stay conscious at HP below 0, and the reduced below-zero HP score for death purposes. This combination – call it Monstrous Resilience – almost ensures that a dumb, drooling monster will raise full-blown hell right up until the hero’s final sword stroke.

The quicker death rolls are a major downer from the monster’s point of view – but a knockout is the same as death anyway in combat against a foe intent on killing you, so the consciousness bonus is a major lifesaver.

Example: The IQ 5, HP 120 dragon makes death rolls every -60 HP, but gains +5 on rolls to avoid unconsciousness from HP 0 or less (with no penalties on the roll for multiples of -HP). It’s hard to say whether that’s a net advantage or not, but it does mean that the the most likely outcomes for the wyrm are victory or quick death, not unconsciousness.

The easiest way to avoid monsters passing out, of course, is simply to state that it doesn’t happen. But you’ll have to decide which monsters get that treatment and which don’t. All of the above is an option for a GM wanting a generic, rules-based solution.

In my opinion, Monstrous Resilience could be nice as an optional, zero-point trait for a low-IQ, nonhuman PC race. Any takers?

This one plays nicely on the battlefield. Go ahead and give it a try. (I like the Monstrous Resilience version, by the way.)

1. This is lifted from GULLIVER here, with some brushing up for 4e. I’d like to hear from others who have put it into play!