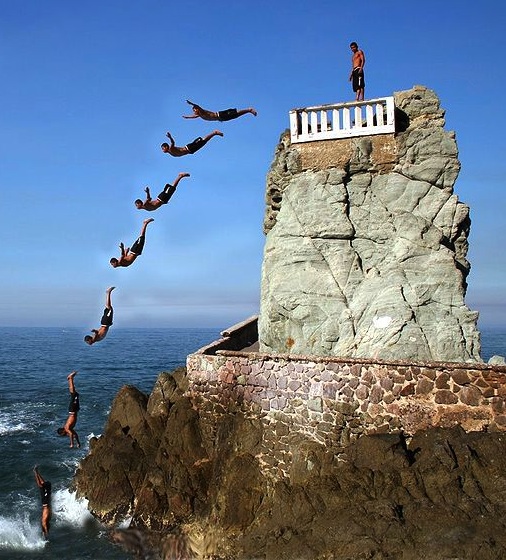 BS 431 offers a nice table for putting falling distance together with velocity. But did you know you’ve already got a tool for generating those numbers? You guessed it: that ever-handy Size and Speed/Range Table. It’ll even tell you how long it takes your PC to plummet off a cliff.

The below is a fine example of the tricks you can do with such a spiffy logarithmic tool. Turn to BS 550 and follow along:

Distance, Time, or Speed: Pick one

Given just one of those three values, you can quickly estimate the other two. The procedure:

1. Take the Linear Measurement column, and read “yards” as either distance (in yards), time (in seconds), or speed (in yards per second). For example, “3 yd” means either 3 yards, 3 seconds, or 3 yards/second, depending on what you’re measuring.

2. For any given Linear Measurement value, the value in that row’s Size column represents the logarithmic value. I’ll capitalize these as Distance, Time, and Speed: a speed of 100 yd/sec is Speed +10 (as +10 equates to 100 yd on the Table).

3. Perform the indicated operation to get unknown Distance, Time, or Speed, and look at the Linear Measurement column again to get the equivalent.

An example will make this much clearer than more explanation would:

Here are the operations:

If you want to check a fall at the end of a given distance (typically the distance to the ground!), here’s how long the object took and what its speed is:

If you want to check a fall at the end of a given time (such as five seconds into Captain Lead’s fall, when Flying Lass swoops to the rescue), here’s how far the object fell, and its speed at that point:

This is a less common concern, but if you want to know the time and distance required to gain a certain falling speed:

That’s about it. Try some numbers!

When a known value falls between two levels on the Table, go with the closer: treat a fall of 45 yards as 50 yards, and calculate speed and/or time from there.

For values less than 1 yard, you’ll have to mentally convert feet or inches into “yards”: 1.5 feet would mean 0.5 yards, 0.5 seconds, or 0.5 yards/second. Just remember that every two levels “up” the Linear Measurement column is a rough halving of the value (and every six levels “up” multiplies value by 1/10).

More importantly, ask yourself whether you really care about such fractional falls anyway!

Sorry, that’s not taken into account yet. If you want to do so, you’ll have to work out falling time and distance up to the point where terminal velocity kicks in, and switch to straight, non-accelerated “distance = speed x time” movement from there. See BS 431 for details.

GURPS doesn’t normally concern itself with falling time, but now that you’ve got a quick calculation, feel free to incorporate time wherever it’d be interesting. For falls of 1 or more seconds, that’s how much time there is to attempt a save. (“Uh, Summon Mattress?”) For falls of less than a second, treat as more or less “instantaneous”, per usual play.

This method produces some crude estimates: your fall might net you a speed of 30 yards/second or 50 yards/second, but nothing in between (unless you eyeball and extrapolate yourself). That’s to be expected: it’ll only be as fine-grained as the Size and Speed/Range Table’s progression! For more precision in typical falls, use the BS 431 table (or a finer-grained log table).

Still, it’s interesting to have a “universal” tool on hand that will cheerfully go beyond the BS 431 table’s limits, to any ridiculous degree. And you can turn it into a tool to work out any accelerated movement:

The operations above are, of course, made for Earth gravity (acceleration of 10 yards/second/second, to round a wee bit). Got some other gravity in mind? Here are variants that let you freely set the acceleration.

Look up acceleration in yards/second/second in the Linear Measurement column, and read the Size column as Acceleration. From there:

All that is useful for more than just falls:

Your space freighter is moving 60,000 mph, but needs to reach 100,000 mph to make a hyperspace jump and escape the Klingonaters. Acceleration is a measly 0.5 g. How long will that take?

You need to accelerate to 40,000 mph over your current velocity. Using the well-known “Move x 2 = mph” conversion, that’s 20,000 yards/sec, or Speed +24, of extra velocity you need. Your acceleration of 0.5 g is 5 yards/second/second, or Acceleration +2. Calculating time to hit a known speed:

This is actually a port: I’ve worked it out and used it for a non-GURPS effort (with a different logarithmic table); here I’ve only reshuffled the numbers to work with GURPS. Next time someone takes a big fall in a GURPS game, I’ve got the printout on hand!

Until then: I just know I’m going to have mangled the numbers somewhere. Let me know if you see an error.

1. The GURPS Size and Speed/Range Table is a little difficult to work with, as its 0-point is set to a unit of 2 yds, not 1 yd. If you’re on handshake terms with physics and were wondering why the funny-looking +/-2 terms in the Acceleration versions of the calculations, that’s the reason.

You’ll note that the earlier set of calculations are just the same thing, with Acceleration set to +4 (10 yards/second/second).

Not much else to say. It’s a simple peek into the sort of things you can do with a logarithmic table. What tricks do you have, Reader?