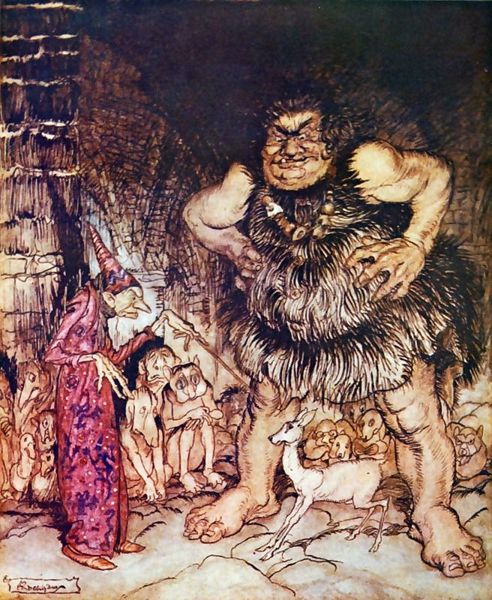 Ogres. Hulking Trolls. Tree-sized Giants. Mountain-sized Jotun. If they’re defined by a size bigger than us, then for this article, they’re all Giants. Because whatever the specifics, they all share one thing in common: “TARG SMASH PUNY HUMAN!”

I’m liberating the Big Games notes on gaming Giants from my old GULLIVER rules for GURPS, to give them a proper new home within the Diner (with a little freshening-up too, including a pinch or two of content from other sections).

Although I’ve got some GURPS 4e-specific notes at the end, the general overview is useful with any game system. Yet it’s all pretty brief; sorry, I haven’t witten The Complete Guide to Gaming Giants. I’d love to add your notes and ideas here, if you too have played oversized PCs, NPCs, or even just “monsters”.

Up the beanstalk we go, then:

Here there be Giants

There isn’t much demand for whole campaigns based on giant PCs. First, where’s the challenge? Your foes will have to be even bigger than you, or small but numerous – and GMs (at least the ones I know!) hate running combats with lots of little fighters. (Yet anything’s possible: a game set in a Giant village, the PCs as hulking demigods in Asgard, even a one-shot, Manhattan-flattening night of towering movie monster battles.)

A Giant in a game is usually a “monster”, an NPC, or a rare PC among more normal-sized comrades. Its presence can’t be ignored in any game scene, and it’ll steal the show when physical power is called for.

The bigger they are, the harder they fall

For all that power, life’s not easy at the top. It’s been said that the world of small creatures is a world of surface areas and drag, while in contrast, the world of big creatures is one of inertia and gravity. The tricky thing is this: Any Giant which is essentially a “scaled up” human, with all else being equal, will have its body weight scaled out of proportion to its physical power. For any ‘height multiple’ (such as 3x human height), he’ll have a human’s muscle power (as well as surface area and skeletal strength) multiplied by the square of the height multiple (that’s strong!), but will also have a human’s body weight multiplied by the cube of the height multiple (that’s really heavy!).

That places a big strain on the Giant. Large creatures require thicker bones to compensate, and would do well to pack on extra muscle as well. A powerful, blocky shape doesn’t only “feel” right for a Giant, it’s biologically appropriate too. (See Scaling: The Importance of Size for a little more discussion on the technical workings of size and living things.)

Unless you invoke magic or exotic alien flesh, though, thicker bones and muscles can only compensate so far. In the end, the bigger the Giant, the more it finds its own body weight a heavy, ponderous burden. Climbing and jumping are tough for big creatures. Falls are deadly (and a Giant not only falls harder for any given distance, but falls farther too when he stumbles). Giants prefer sticking to two dimensions.

Then there are more everyday problems. Giants outside their society have trouble with the homes, tools, and transportation of smaller races. Food’s a problem too: though dietary needs may be low relative to mass, Giants will still eat human hosts out of house and home.

Consider a chair for a 12′ Giant, who has eight times a human’s weight. Twice as big in each dimension, the chair has the weight of eight (the cube of two) human chairs. The Giant has only four – the square of two – times or so the strength of a human, so the big fellow finds his own dinner chair unusually heavy to pick up.

But wait – any cross-section of the big chair’s frame will have only four times the cross-section of a human chair’s, when it needs to support eight times the weight. So just like Giant bones, the frame needs even thicker width and depth dimensions to handle that load, which makes it even heavier. You can see why Giants don’t rearrange their furniture on a whim.

Giant gear will be heavy and hard to manage for the big guys, let alone for humans. That includes weapons. Giants will realistically have to use clubs and stones that are small relative to their size. They’ll toss rocks that are heavy and dangerous, but are smaller than the boulders you might have imagined. Giant-scale shortswords and palm-sized throwing rocks might be all your Colossus can handle, though you can rest assured that these Giant versions will be bigger and deadlier than the human equivalents.

Similarly, armor scaled up in each of the three dimensions would be impenetrably thick to hapless human foes, but might also be unwearably heavy to the Giant, with weight multiplied by the cube of the height multiple. Because of this, big guys will typically have to wear armor that’s not appreciably thicker than human armor. That makes for disappointingly flimsy protection from the Giant’s point of view, but human-thickness armor would at least keep the weight multiple down to a manageable square of the height multiple.

Overall, giant gear will be heavy relative to its own robustness, with weight scaling up faster than structural soundness. Giants can lighten the load by cutting some dimensions – say, making a fry pan thin-walled, or reworking a giant broadsword to rapier slimness – but that only increases the fragility problem.

It’s an interesting twist on fantasy convention that “real” tiny Faerie might toss their gear (and themselves!) about with haphazard abandon, while “real” Giants would learn to go about their business deliberately and delicately, even within their own Giant villages!

The hard science view of giant creatures is covered by the above notes. Here’s a summary in system-agnostic terms; if your preferred game system doesn’t already handle these effects, you may want to do some rules tweaking before unleashing the big boys.

Giants in fiction and games don’t often follow those realistic guidelines above, ignoring some or all weight-vs-strength issues. In other words, mighty strength and house-crushing weight remain part of the fun, but the Giants aren’t appreciably slower than us, can jump nice Giant distances, get the same bumps and breaks in a fall that a human gets, and wield their huge tools as easily as we use human ones. It’s all “wrong”, but if it’s fun, go for it!

You can get this effect in one of two ways:

1) Boost Giants’ power a lot so it keeps up with their colossal weight. A lot of fiction does this; magic or alien flesh provide a perfect rationale. It’s now reasonable that your Giants have all the agility and ability of humans, plus the benefits of big size—though you’ll have to decide whether that super-boosted physical power is a problem in the game. (The combat damage Giants deal under this approach may be off the charts!)

2) Invoke special effect. Massive weight relative to their power? Who cares; if you say Giants move like humans, then so they do. Similarly, you can give your Giants tools light enough for them to handle, but with the effect that they look like human objects scaled to Giant size. Your Giant’s baton somehow has the size and shape of a Giant-length quarterstaff; his Giant throwing hatchet mysteriously looks like a well-proportioned, two-handed Giant axe. (Better yet, just don’t think about how much the Giant’s weapon weighs, unless you have to. It’s a Giant axe, he wields it like a human wields a human axe, it deals an appropriately scary nd10 damage, and we don’t care what it weighs.)

Either way, check whether any further tweaks are needed to get “humanlike” results. For example, your game system may fail to consider weight in falling damage, letting Giants with massive hit points brush off measly human-sized damage following a plunge. Increase the damage appropriately if you want them to suffer proportionately serious results.

Similarly, if you consider Giant meals at all, you might want to scale dinner size with body weight. That’s probably more than a real Giant would eat, but it’s dramatically impressive.

Giants in fiction often go beyond the above, taking the “they’re really strong!” idea to extremes. They jump distances many times their towering heights. They’re too tough to be hurt at all in “little” falls. They wield oak trees and boulders that are proportionately bigger than the largest weapons a human can use!

All of this is precisely the opposite of how object weight and Giant strength would interact, but the sight fits right into a Norse saga or other over-the-top setting. Just invoke outrageous cinematic special effect, and your Jotun can happily leap a river with a small mountain carried in his arms. (Oh, and afterward he refuels by eating whatever is dramatic, not what any rules decree. An ox or two, swallowed whole, is a good start.)

Giants on a “mythological” scale probably don’t even need stats and rules to enter the game, if their role is as plot device and not detailed NPC or combat foe. If description alone will cover the creature, save yourself the work of hammering out stats, and just make up appropriate Giant effects on the fly. You don’t even have to stay consistent. (The size of characters like Thor or Paul Bunyan is anything but consistent from story to story.)

GULLIVER Mini for GURPS 4e lays out most of what you need to know to build and play Giants, with suggestions for scaling stats, ready-made templates for several SMs, systematic options for adding weight-vs-strength ponderousness, and combat notes not covered here. It’s all quick and simple, as 4e is much better equipped to handle Giants than was 3e.

Finally, the old GULLIVER has Scaling the Game notes to let a campaign full of Giant PCs use more “normal” stats. (It’s not critical, though, even if you are running such an odd game, as ST or HP stats of 50 or 100 or so aren’t particularly hard to work with.)

Even if you don’t play GURPS, all of the above should provide useful techniques for working Giants into your own game.